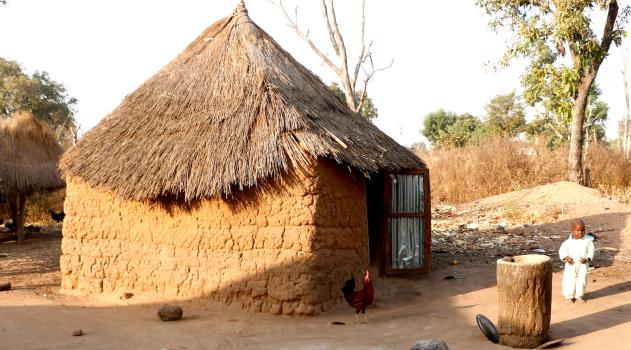 Children who share their play and sleeping spaces with free-ranging poultry are exposed to high levels of contamination from animal excreta. Photo credit: Shutterstock.com

For decades, implementers have applied water, sanitation, and hygiene (WASH) and nutrition-based interventions—alone and in a variety of combinations—to address diarrheal disease and stunting among infants and young children (IYC) in low- and middle-income countries. Given the extensive and intensive efforts, why aren’t we seeing more progress?

This unanswered question informed a recently completed USAID study “Toward a Hygienic Environment for Infants and Young Children: A Review of the Literature.” On April 5, 2018, researchers from USAID’s Water, Sanitation, and Hygiene Partnerships for Learning and Sustainability (WASHPaLS) activity hosted a webinar to present their findings, share key lessons for implementers, convey the project’s next steps, and take questions.

USAID’s Jesse Shapiro, the Environmental Health Team lead and senior WASH advisor for USAID’s Bureau for Global Health, explained how the current research fits into WASHPaLS’ overall goal of enhancing global learning and adoption of evidence-based programming to achieve universal sanitation and hygiene access. This study is the second in a series of desk reviews supporting WASHPaLS’ focal task areas, each of which will be followed by a field research component. The first review’s findings were covered in an earlier webinar on community-led total sanitation, held in December 2017. The third will be forthcoming in 2018 and will focus on market-based approaches to sanitation.

Before launching into the findings of the most recent desk review, task lead Julia Rosenbaum explained why WASHPaLS is studying fecal exposure in home environments. She also discussed that while limited, the scientific and grey literature tell us there are health risks to IYC from previously underemphasized sources of contamination such as animal feces and that the transmission pathways are not disrupted by traditional WASH interventions. And it all goes back to that unanswered question: Why aren’t we seeing progress on child growth in spite of myriad WASH and nutrition interventions? What are we missing?

Many studies are available on the effectiveness of WASH on diarrhea prevention but fewer related to WASH and child growth. Rosenbaum presented illustrative evidence that dirty environments can impair child growth even in the absence of diarrhea. This connection may be explained by the environmental enteric dysfunction (EED) hypothesis, in which chronic fecal exposure changes the ability of the lower intestine to absorb nutrients and protect against harmful pathogens. However, EED is difficult to measure and not fully understood. The desk review did document substantial evidence that several underemphasized pathways are connected to increased infection, undernutrition, and stunting. These pathways include direct consumption of domestic animal excreta and indirect exposure to both human and animal feces through eating dirt, wash water, and exploratory mouthing of objects.

Animal feces are abundant in areas where free-range animal husbandry is practiced and concentrated where animals are corralled. For example, one study in India recorded high levels of contamination in nearly every fecal-oral pathway it explored, including household water sources and mothers’ and children’s hands. The health risk appears to be most pronounced when IYC and animals, particularly poultry, share sleeping quarters. However, the overall impact of exposure on health and child growth is not as clear cut as it may seem, since animal husbandry contributes nutrients to children’s diets and many rural families repurpose animal feces as fertilizer or fuel sources.

Up to 70 percent of diarrhea in IYC may be transmitted through food (and water used in food preparation), and studies show that the steepest decline in growth among IYC occurs when they switch from breastfeeding to complementary foods (which are vulnerable to contamination through water and other means).

The desk review concludes with an inventory of current technological and behavioral efforts to prevent the direct and indirect ingestion of feces through safe management of animal and IYC feces: better flooring, IYC handwashing, improved food hygiene, and increased usage of play mats and playpens, and highlights that little evidence exists to date on their protective effect. To help fill evidence gaps, WASHPaLS is preparing an exposure study in Ethiopia to test the protective value of playpens, collaborating with USAID implementing partners.

WASHPaLS is also preparing to issue a small grants solicitation to test behavior change innovations that address safe management of poultry excreta. Look for more information in the coming weeks on Globalwaters.org.

The webinar concluded with some takeaways, including the need for more research and evidence-based intervention guidance on which pathways represent the highest risk to IYC, and which interventions would be best positioned to reduce exposure and improve outcomes.

Mr. Shapiro, Ms. Rosenbaum, and her WASHPaLS colleague Dr. Jeff Albert also answered audience questions that ranged from: the pros and cons of contained play spaces, whether it was better to contain animals or children for exposure reduction, and the feasibility of putting diapers on chickens.

Interested in learning more? Listen to the webinar recording here. Or read the full study.