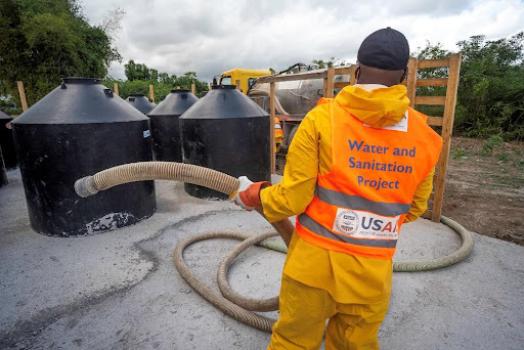 In 2016—the year USAID’s climate risk management (CRM) policy took effect—Hurricane Matthew struck the southern coast of Hispaniola. The hurricane damaged much of the water and sanitation infrastructure where some of Haiti’s most vulnerable people live. For those at USAID/Haiti, with plans for a water and sanitation project underway, the Category 5 hurricane was a timely reminder of the urgency of CRM approaches to protect community water and sanitation systems. USAID conducted a climate risk assessment and incorporated the findings in the design of what ultimately became the USAID Water and Sanitation Project.

In addition to hurricanes, Haiti is troubled by more intense and frequent rainfall, which causes floods and landslides, alongside periods of more intense and frequent drought. These weather extremes threaten the availability and quality of Haiti’s surface water and groundwater. Storms and landslides can handicap water delivery, while broken and overflowing latrines can introduce contaminants into public water sources and increase the risk of waterborne diseases like cholera.

To address these challenges USAID’s WATSAN (water and sanitation) project works to strengthen local capacity and the water and sanitation infrastructure so that it can withstand and operate reliably under floods, landslides, and droughts. The project introduced a suite of CRM actions to account for climate risks and safeguard valuable resources.

“Infrastructure must be designed to withstand future conditions, including the impact of climate change. Historical events no longer predict the extent of events to come.” said the project’s Chief of Party, Dan O’Neil. “What used to be considered a 50-year flood is now a 10-year flood. Designs need to be based on this reality."

The WATSAN project incorporated CRM into its activities in three main ways:

Another crucial outcome is stronger local capacity to manage climate risks to water and sanitation systems. Stakeholders now are more aware of natural resources management, the importance of both natural and built protections to improve water security, and other measures that build resilience to climate change impacts on water systems.

Engineer Jonel Francois, Director of the Regional Office for Drinking Water and Sanitation (l’OREPA Sud), said the WATSAN project helped him realize the importance of considering climate risk in decision-making. “Climate change must be taken into account.”

This blog was originally published on ClimateLinks.