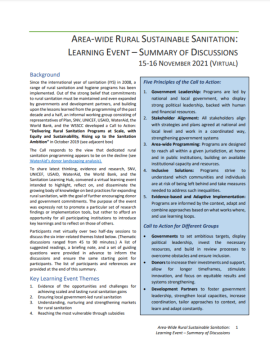 Since the international year of sanitation (IYS) in 2008, a range of rural sanitation and hygiene programs has been implemented. Out of the strong belief that commitments to rural sanitation must be maintained and even expanded by governments and development partners, and building upon the lessons learned from the programming of the past decade and a half, an informal working group consisting of representatives of Plan, SNV, UNICEF, USAID, WaterAid, the World Bank, and the WSSCC developed a Call to Action: “Delivering Rural Sanitation Programs at Scale, with Equity and Sustainability, Rising up to the Sanitation Ambition” in October 2019.

The Call responds to the view that dedicated rural sanitation programming appears to be on the decline.

To share the latest thinking, evidence and research, SNV, UNICEF, USAID, WaterAid, the World Bank, and the Sanitation Learning Hub, convened a virtual learning event intended to highlight, reflect on, and disseminate the growing body of knowledge on best practices for expanding rural sanitation, with the goal of further encouraging donor and government commitments. The purpose of the event was expressly not to promote a particular set of research findings or implementation tools, but rather to afford an opportunity for all participating institutions to introduce key learnings and to reflect on those of others. The summary of discussions is presented in this report produced by USAID’s Water, Sanitation, And Hygiene Partnerships And Learning For Sustainability (WASHPALS) project.