Addressing the crowd at Washington D.C.’s Wilson Center, Sasha Koo-Oshima immediately establishes the stakes of the matter at hand: the problem of water pollution. When water quality is degraded, she says, it’s “a potential destabilizing factor in global economy and security.”

Along with three other panelists, Koo-Oshima, senior adviser of the Environmental Protection Agency’s International Water Program, joined the Sustainable Water Partnership (SWP) on April 10 to discuss causes and solutions surrounding the problem of pollution. Almost immediately, the staggering nature of the issue became clear. Nearly one billion people worldwide lack access to clean water, and children in developing countries lose 443 million school days every year due to diseases related to water, sanitation and hygiene. In the United States alone, the tourism industry loses nearly one billion dollars per year due to nutrient pollution and harmful algal blooms. 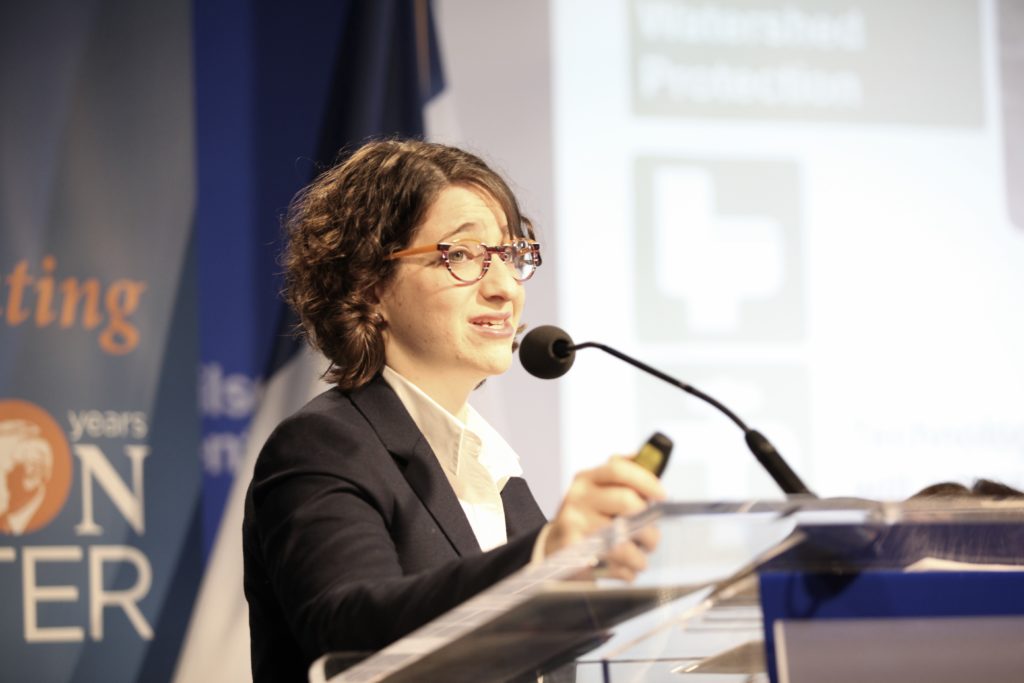 WaterAid’s Robyn Fischer explains the link between water, sanitation and hygiene and women’s issues. Photo courtesy of the Wilson Center.

And as WaterAid’s Robyn Fischer highlighted, in most places the consequences of limited water access fall primarily on women and girls. Women in sub-Saharan Africa spend 16 million hours each year collecting water, but as Fischer pointed out, “it’s not always safe – nor is it clean.” These long journeys cost women more than time. Women who travel long distances for water face a greater risk of gender-based violence, and lack of clean water increases the likelihood of illness.

As Koo-Oshima pointed out, these issues have consequences far beyond public health and the environment. When water-borne disease keeps people from working, their livelihoods suffer – as does the economy as a whole. Lack of access to safe, clean water can drive people to migration, leading to personal danger and, eventually, national instability and insecurity.

“Fresh water, as we all know, is a limited water resource, and one for which demand is growing practically everywhere,” said Koo-Oshima. “Nearly all human activities require additional water demand, and hence produce more wastewater.” According to Winrock International’s Jon Winsten, agriculture is the worst offender – “the leading cause of water quality degradation in many parts of the world.”

And in emerging countries, most of that wastewater – 90 percent ­– is not been appropriately treated, exposing the water supply to agricultural run-off, waterborne disease and dangerous chemicals. As populations grow at staggering rates, especially in urban centers, this problem will only get worse over time.

As Koo-Oshima said, “Wastewater is not a burden, but a valuable resource.” Once it’s been treated, wastewater is a safe and reliable source of water that can be used to offset other problems, like water scarcity. But harnessing these benefits requires: 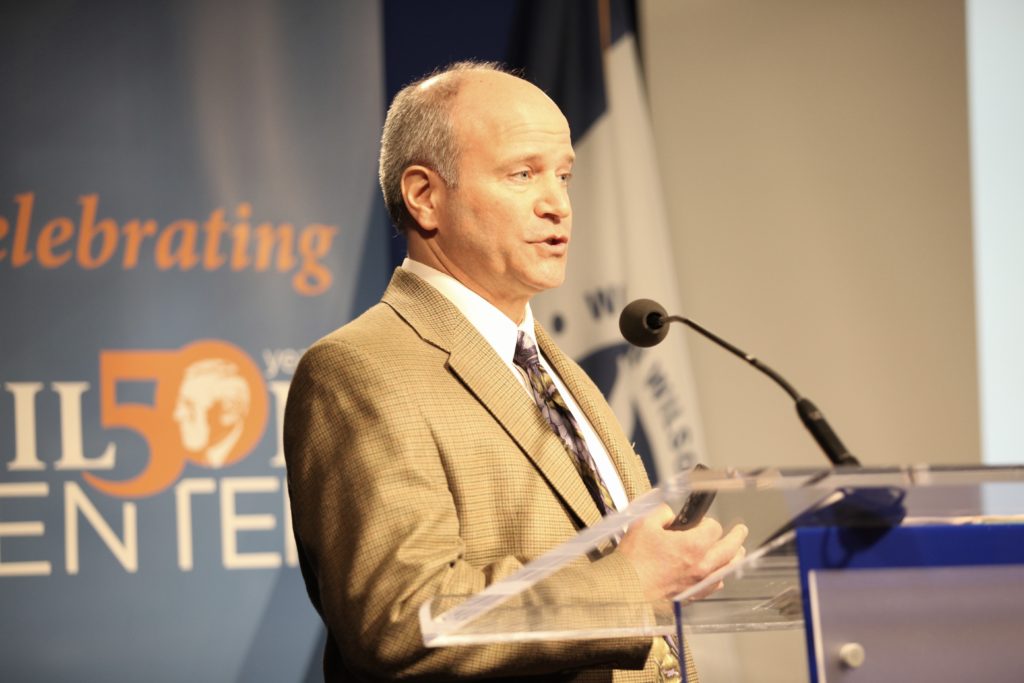 It sounds simple, but each step in this process requires innovative solutions. For example, how can farms reduce agricultural pollution? “If you take a regulatory approach that’s restrictive to farmers,” Winsten said, “you generally constrain agricultural productivity” – which in turn endangers food security.

In the United States, the current solution to this problem is “pay-for-practice” conservation, which reimburses farmers for the mere implementation of specific conservation practices – whether or not they’re actually successful. But as Winsten said, Winrock is pioneering a new approach in many of its programs — “pay-for-performance” conservation. This flexible, efficient solution to the problem of agricultural pollution pays farmers based on how well their agricultural practices manage and reduce harmful phosphorus run-off. By providing performance-based incentive, this strategy ensures that concern for the environment becomes incorporated into farm business planning. 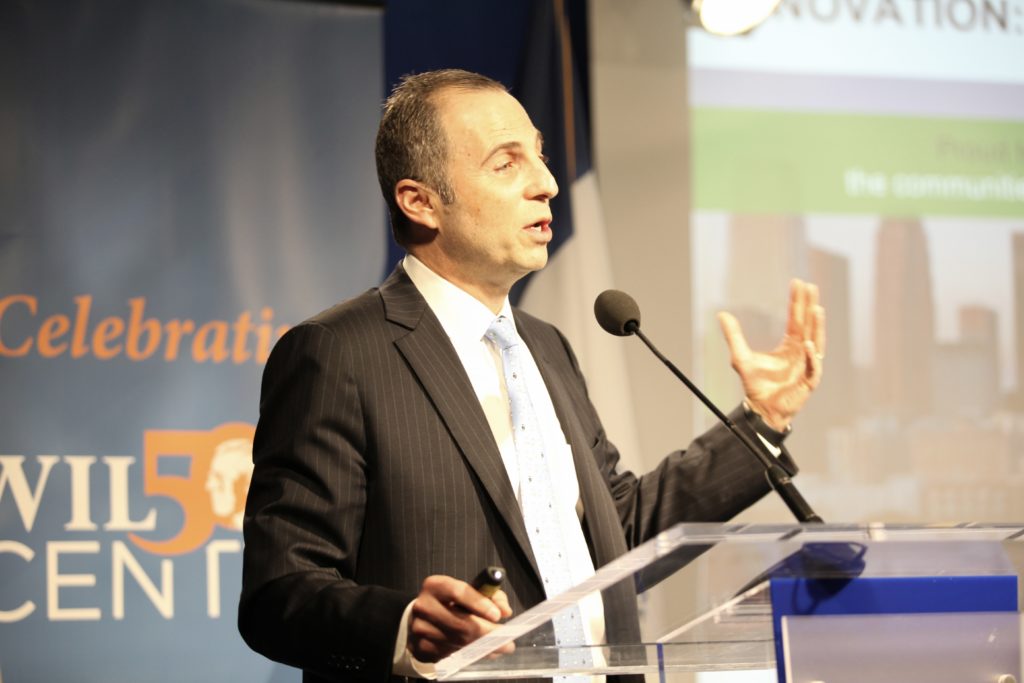 Pollution reduction isn’t the only solution for dirty water. “One of the ways you can address pollution and scarcity is to treat wastewater to a standard high enough for reuse,” said Jon Freedman of SUEZ. Reused wastewater can run power plants, contribute to crop growth and even fill drinking water reservoirs.

But the United States is only reusing six to eight percent of its wastewater; globally, the rate is as low as three percent. “We can do better,” Freedman said.

The problem of water pollution can’t be solved overnight, but the conversation begun here can act as a springboard for further solutions. According to SWP Director Eric Viala, the key takeaway of the day’s event was the necessity of integrated solutions. “Managing decent water quality for drinking cannot be separated from managing decent water quality for all other users,” he said.

The final installment of the Sustainable Water, Resilient Communities series will take place Wednesday, May 30 at 9:30 EDT at the Wilson Center. Stay tuned for more details.

Watch a recap of the event below: