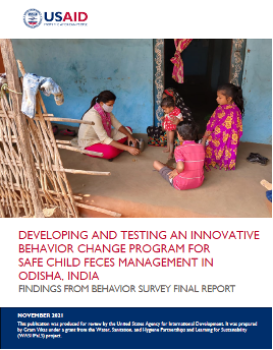 Globally, access to sanitation is on the rise, with related reductions in open defecation. Yet an often-overlooked component of sanitation is safe child feces management (CFM). Child feces may contain more pathogens compared to adult feces and are likely a significant source of fecal exposure in rural Indian households and other similar settings. Improvements in safe CFM are key to achieving reductions in fecal exposure and improvements in health, particularly for infants and young children. Only a few studies have been conducted on behavioral factors that influence the adoption of safe CFM practices and the role of novel CFM hardware might play to facilitate improved CFM practices. To address this information gap, USAID’s Water, Sanitation, And Hygiene Partnerships And Learning For Sustainability (WASHPALS) funded Gram Vikas (GV) to develop and test behavior change programming for safe CFM in Odisha, India. GV is also charged with designing and testing hardware and a behavior change strategy that promotes safe CFM behaviors along the entire child feces exposure pathway for households with children under five years old.

The GV team followed a user-centered design approach to develop novel and low-cost hardware as part of the program design and piloting. The intervention focused on two CFM behaviors of interest: (1) safe disposal of child feces, and (2) child latrine training. Target participants were primary caregivers of children less than 5 years old, often the mother of the child. However, other household members and secondary caregivers, such as fathers and grandmothers, were also engaged during certain activities. The intervention included five activities:

Each activity in the set was designed to address particular determinants which had been previously identified in the formative research and piloting phases to influence the practice of the targeted behaviors.

This summary reports the results of the behavior surveys carried out by project supervisors following HHV2 and answers the following questions: