Côte d’Ivoire: Quantified assessment of sanitation needs in the target municipalities of the MuniWASH Activity in Côte d’Ivoire for efficient planning of interventions 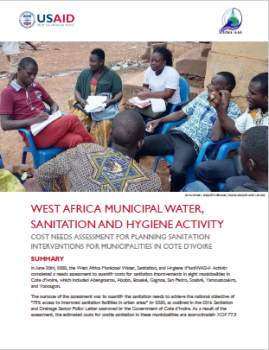 The purpose of the assessment was to quantify the sanitation needs to achieve the national objective of "75 percent access to improved sanitation facilities in urban areas" by 2030, as outlined in the 2016 Sanitation and Drainage Sector Policy Letter approved by the Government of Cote d’Ivoire. As a result of the assessment, the estimated costs for onsite sanitation in these municipalities are approximately XOF 77.5 billion, which includes XOF 74 billion for the construction of 130,040 toilets and XOF 3.5 billion to acquire 77 emptying trucks. There are several key actors that support access to sanitation services at the household level including civil society organizations (CSOs), private operators, and local elected officials. The assessment found that each one has different perceptions of the approach needed to improve sanitation in the communities. CSOs placed emphasis on more toilets and sanitation infrastructure for households. Private operators highlighted the need for improved access to financing. Finally, the elected officials signaled the need for significant improvements in the institutional framework with more responsibility entrusted to them.

This case study is also available in French.