Achieving gender equity in India is predicated on addressing the water, sanitation, and hygiene (WASH) needs of females in the country. Predominantly tasked with the responsibility to manage household water and sanitation, women face immense opportunity costs that limit their opportunities for advancement. To address this challenge, USAID and Gap Inc. launched the Women + Water Alliance (W+W Alliance) in 2017 to improve and sustain the health and well-being of women and communities touched by the apparel industry in India. On behalf of the W+W Alliance, the Institute for Development Impact carried out a baseline study in the western state of Maharashtra, India, along the Godavari River sub-basin (in the W+W Alliance’s implementation districts of Wardha and Yavatmal) to measure relevant women’s empowerment and WASH indicators. As cotton-growing communities, these two districts provided a snapshot into the realities of farming families throughout the state. According to the Maharashtra Department of Agriculture, cotton production from 2018–2019 reached 4.26 hectares with 7.13 million bales produced. Of that amount, 816,000 bales were produced in Yavatmal villages and 615,000 in Wardha. Moving forward, the W+W Alliance hopes for this study to play a role in ensuring that the significant outputs of these communities, and the livelihoods of their members, should not be affected by WASH deficiencies. Key findings are summarized below.

Incorrect WASH practices are still common in surveyed villages. Eight in 10 women do not practice correct handwashing techniques in communities in both Wardha and Yavatmal. For example, nearly half of the women who are both the primary caregiver and primary food preparer do not wash their hands after cleaning their babies bottoms or disposing of child feces. With regards to water treatment and water storage, very few villagers report correct practices; only 18 percent of villagers treat their water properly and only 7 percent store their water in a clean storage container. Considering some of these respondents may have sourced their water from an unimproved water source such as an unprotected dug well, the risk of adverse health effects is compounded by these treatment and storage decisions.

Water access remains a challenge for many in Wardha and Yavatmal. One-third of surveyed households in Maharashtra do not have access to water on their premises, with Yavatmal seeing overall much less water access than Wardha. As such, members of these households must travel off premises to fetch water for drinking and other household needs. Two out of 10 households in Maharashtra get their water from an unimproved water source, thus increasing their exposure to outside contamination. These numbers are higher in summer when one in 10 households experience water scarcity, pushing them to use alternative water sources. Nearly half of the households in Wardha and one-quarter of the surveyed households in Yavatmal have limits on their drinking water. Even when they travel to collect water, what they source may not be enough to meet their drinking and household needs.

Women are disproportionately responsible for water collection—81 percent of surveyed females, as compared to 19 percent of men. On average, villagers travel around an hour and ten minutes each day for water. This use of valuable time results in an estimated loss of 597 INR ($8.30 USD) per month in potential wages for these women, which is around 13 percent of a monthly basic minimum wage for unskilled factory workers in the most rural regions. Scarcity of water in summer may also further exacerbate this loss of time and potential wages.

Women are stressed by water sourcing, yet they have limited involvement in WASH financial decisions.One-third of surveyed women in Maharashtra express concerns with the stressful nature of sourcing water. However, despite the low levels of correct WASH practice, only 14 percent of women worry about disease being spread through toilet use and even fewer women (11 percent) worry about the safety of their drinking water. Women also play a limited role in WASH financial decision making in their households. More than half of the households reported that men would have the final say to build a toilet facility and close to half reported that men would have the final say in water source improvement. Sixty percent reported that men would make the decision for sanitation investment, in general, and 58 percent reported the same for water investment. In contrast, just 21 percent of households reported that only men would make the decisions regarding water management. Ultimately, while women do have input in their daily household WASH decisions, men tend to make final decisions regarding use of financial resources.

Water satisfaction is high in both districts, despite persistent challenges, and plans for improvement are minimal. Sanitation satisfaction, however, is lower, and more respondents cite an intent to invest in improvements. Despite challenges with water access and sourcing, nine in 10 surveyed households are satisfied with their main water source. Seventy-nine percent of respondents are satisfied with collection time, although those that travel more than 30 minutes are significantly more dissatisfied (5 percent of the overall population surveyed in Maharashtra). Sanitation, on the other hand, has lower levels of satisfaction, with only 75 percent of respondents satisfied with their main sanitation facilities. While the majority of surveyed households have access to improved sanitation facilities (two out of three), when water is scarce, residents are unable to make use of improved sanitation facilities like latrines.

Fourteen percent of the households surveyed plan water improvement investments and 30 percent plan to invest in improving their sanitation facilities, such as installing a new toilet or new tap. While households mentioned that the desire and understanding for improved water and sanitation facilities exists, barriers include lack of funds, water scarcity, and perceptions of responsibility, specifically that the local government would/should finance WASH improvement.

Expanding women’s awareness of correct WASH practices and harnessing their inner self-efficacy can lead to positive improvements in their communities. Women in Maharashtra scored relatively high on a self-efficacy scale adapted to the WASH context, averaging a raw score of 21.28 out of a 30-point scale. However, older women, women with lower levels of education, and those coming from poorer and less educated households tended to have lower self-efficacy scores. 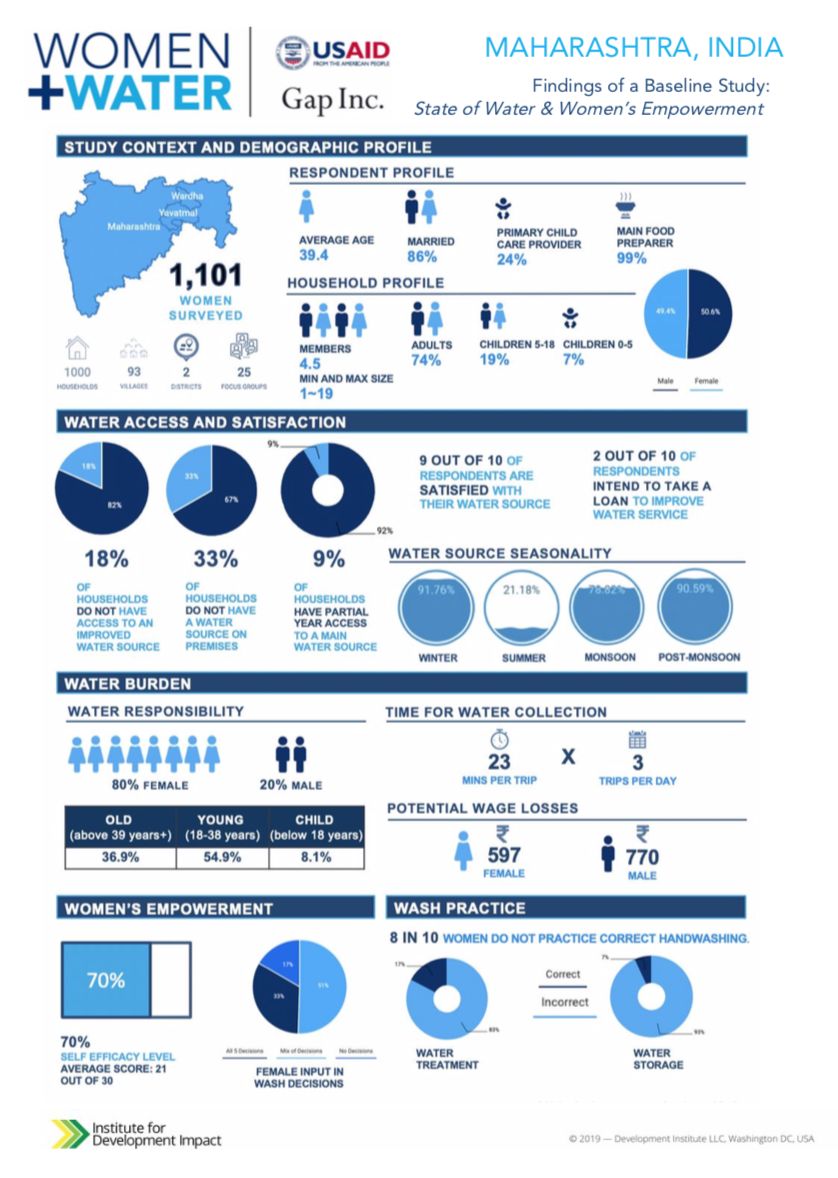 While the overall self-efficacy scores are relatively high in Maharashtra, women’s exercise of agency is low in all aspects of WASH, except water management. Tackling low levels of WASH practice, building awareness around the risks with unimproved water sources and sanitation, and tapping into this inner capacity of women are priorities of W+W Alliance in Maharashtra. By increasing WASH knowledge and advancing an enabling environment at community and state levels to strengthen the role of women as agents of change in Maharashtra, W+W Alliance is working to create large-scale change in how water is managed. In doing so, the Alliance is leveraging expertise, resources, and innovative approaches from a consortium of partners from civil society, the private sector, and government. WaterAid joins CARE, Water.org, the Institute for Sustainable Communities, the International Center for Research on Women, and the Institute for Development Impact to unlock the potential of women in communities touched by the global apparel industry.

By Elizabeth Issac and Chelsea Raubenheimer, Institute for Development Impact