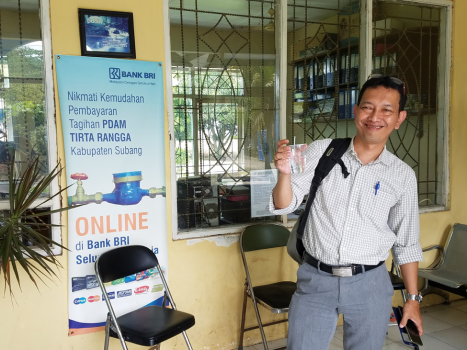 What happens after USAID-funded WASH projects have closed? Are end-of-project outcomes sustained after one, two, or even seven years? USAID is supporting a series of independent ex-post evaluations of closed USAID WASH activities to inform future programming and these are the questions the Water Communications and Knowledge Management Team answered through its most recent ex-post evaluation of the Environmental Services Program (ESP), implemented by DAI in Indonesia between 2004 and 2010.

What did we evaluate? Our evaluation examined the sustainability of several of the key components of the ESP activity, which aimed to improve health through expansion of clean water and sanitation services:

How did we evaluate it? The evaluation team took a primarily qualitative approach to data collection. In April 2017, we conducted 37 semi-structured interviews and 12 focus group discussions with water utility staff, water utility customers, government representatives and participants in ESP’s microcredit program. The team also used data from government-collected water utility performance reports to compare the proportion of a utility’s catchment area population that has a piped connection and the number of household connections between 2010 and 2015. The team updated and applied the water utility performance index tool, which was developed and used annually by ESP to monitor utilities’ management and financial capacity.

What did we find? Water access improved in most areas since project close, and management tools remain in use, such as standard operating procedures. In comparison to 2010, we found these water utilities are improving in terms of having a corporate plan, tariff structure, and human resource policy. Financial capacity and microcredit use results were more mixed, however. Utilities were not able to maintain progress in improving financial management, as measured by operating ratios and levels of debt. Furthermore, most customers preferred alternative water sources such as household wells and complained of inconsistent utility service provision and poor water quality, which further threatens financial performance as some customers disconnect. ESP’s microcredit program ended in the three water utilities in our sample where it was formerly active, in part due to challenging bank vetting procedures for the context. These three water utilities have replaced ESP’s microcredit program with discount or installment plans for lower income families to pay for new household connections.

Why does this matter? The WASH sector lacks substantial research on the sustainability of municipal water utility capacity building efforts, yet it is critical to the provision of safe, piped water to urban populations. Results from this evaluation indicate that accessible tools such as standard operating procedures or regular performance benchmarking processes can provoke continued operational improvements over time. However, financing for water utilities remains a critical issue to resolve, particularly in the Indonesian context where many water utilities amassed tremendous amounts of debt to the central government in the 2000s. The popularity of utilities’ discount and graduated payment mechanisms demonstrate a continued need to provide mechanisms that facilitate access to new water connections for the poor. Understanding this challenge is important in the design of future programs aiming to address water utility capacity building. This is relevant to the second follow-on activity to ESP, the IUWASH PLUS Program, which is currently being implemented in Indonesia.

Want more information? Take a look at the full evaluation, the evaluation brief, or reach out to the Water CKM M&E Specialist directly to learn more. You can also read the executive summary in Bahasa and check out a webinar presentation of the findings.