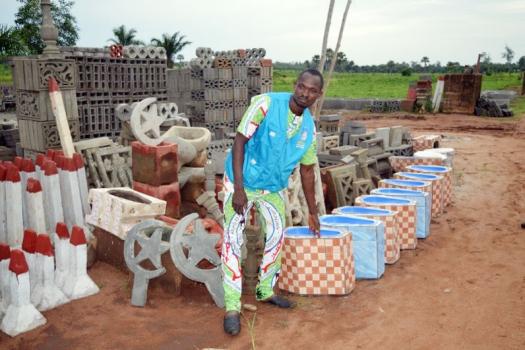 Paul Kpadonou began his career as an entrepreneur on the side of the highway.

As he sold garden decorations from his roadside business, Paul dreamed of creating a successful enterprise in his suburban town of Abomey-Calavi, Benin. His shot at prosperity came with the “WC Mimin” brand of toilets, which he discovered during a campaign promoting the product.

“I understood that this product would make many people happy,” Paul explained. “The traditional toilets that many households use are full of insects with nauseating odors.”

Paul was excited at the prospect of improving public health in his community. In Benin, only 22 percent of urban populations use basic sanitation facilities, and 38 percent practice open defecation. WC Mimin is a latrine brand created by the USAID-funded and PSI-implemented urban Sanitation Service Delivery (SSD) project. The project aims to increase access to toilets by training private sector micro-sanitation entrepreneurs to provide sanitation services to urban households.

Unfortunately, Paul faced a setback when the WC Mimin project team decided not to work with him because his shop was close to an entrepreneur they were already working with.

Determined to improve sanitation access in Abomey-Calavi, he turned to the entrepreneurs already involved in the SSD project to learn more about their work so that he, too, could build the latrines he knew his community needed. The young businessman used the molds his peers were to build his own latrine models.

To attract more business, Paul built one of these WC Mimin latrine models in his home so that potential customers could try the product. As more clients tried the new toilet, the word about its ease-of-use quickly spread to the community. Paul soon became known as the “King of Toilets” in Abomey-Calavi.

In the 18 months since Paul began building WC Mimin toilets, he has built and installed 1,380 units and has made a profit of more than 11 million West African francs. His initiative now has its own production facilities and conducts large-scale installations thanks to an extensive hardware shop network.

USAID’s Sanitation Service Delivery Project is working to create a more effective, efficient, and inclusive sanitation market for the urban poor in Benin, Côte d’Ivoire, and Ghana by partnering with the private sector, governments and municipalities, and consumers. It aims for at least 25 percent of those gaining access to sanitation to be from the lowest poverty quartile.