Breaking Gender Stereotypes, One Toilet at a Time 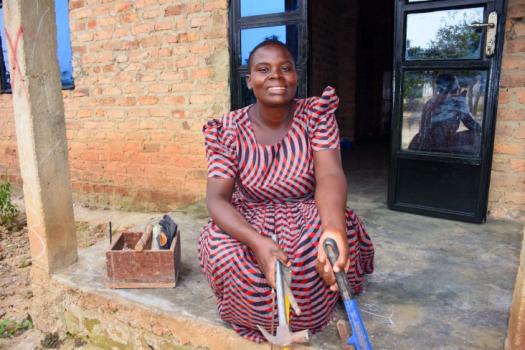 This story originally appeared on USAID.gov.

Merab Namiwanda is an instructor at Ssanje Community Polytechnic Institute and a professional plumber. The mother of four attended a mason training conducted by USAID’s Uganda Sanitation for Health Activity in Kyotera, which demonstrated an improved sanitation product called SATO. SATO products are plastic devices distributed in Uganda by Nice House of Plastics on behalf of the Japanese company Lixil; they use a trap door to seal off toilets when not in use and provide a washable floor and hygienic experience for the user. Merab quickly grasped the benefits, including eliminating flies and odors from the toilet. Immediately after the training, she installed two SATO pans at her home.

Poor sanitation and hygiene is a major health concern in Uganda. It costs the country billions of shillings each year in lost productivity and medical costs. This hinders national development by making Ugandans poor, sick, and putting many at a risk of death.

As a plumber, Merab is able to improve sanitation in her community as well as break gender stereotypes. Women in Uganda are faced with societal pressures that limit them to cooking, raising children, and caring for the household. Merab, however, has a knack for “masculine work.” Success has not come easily. Her parents were initially disappointed by her career choice, and her first clients doubted that she was capable of doing the work. She has persevered, though, and is now one of the most influential women in her community. “My parents are very proud of me!” Merab testifies.

USAID’s Uganda Sanitation for Health Activity continues to bridge the gender gap by advancing women’s status in the sanitation value chain and bringing sanitation products and services closer to both men and women, giving all groups the opportunity to benefit from improved sanitation.

One of the biggest successes for the activity has been the all-female sales network of community health promoters affiliated with BRAC, the international credit institute. Prior to this effort, traditional views held firm that it was the man’s job to invest in toilet improvements, while it was a woman’s job to clean the toilet. With the power of an all-woman sales force, more women are purchasing SATO products.

Merab’s persistence and positive community influence, like many female BRAC community health promoters, has led to others cracking open the shell that prohibits women from male-dominated work fields.

“My neighbors recently sought my advice about taking their daughter to a technical school to do mason work, and I encouraged them. To me, that is a very big achievement. It shows that people’s minds are changing towards work previously labeled as ‘men only.’”