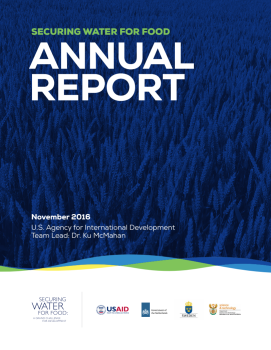 Securing Water for Food (SWFF) released its annual report, highlighting the program’s successes in the last year while identifying places for growth. In Project Year 2, SWFF’s activities focused on improving gender integration across all processes, improving local technical assistance and acceleration support for innovators, and outreach for the Fourth Global Call for Innovations.

The report also highlights the overwhelmingly positive external mid-term performance evaluation from earlier this fall, which advocated for a program extension. Based on that recommendation, the partners extended the program through 2020 and promised an additional $2.5 million of funding for program support.

Thus far, SWFF has received more than 1,500 applications from more than 90 countries across four calls for innovations. These SWFF innovators have helped save approximately 2 billion liters of water, helped produce nearly 290,000 tons of food, and reached more than one million farmers and other customers. In the last year alone, SWFF innovators helped farmers worldwide increase crop yields by as much as  97 percent while creating more than $1.8 million in sales, with an average profit margin of five percent. Although most SWFF innovators are still working toward commercialization readiness, these small businesses are already seeing real impact on the ground. MyRain LLC, which expanded its drip irrigation and related hardware through 500 retailers in India, saved over 1.4 billion liters of water in the last year alone.

SWFF has identified multiple ways to grow in Project Year 3. The program will focus on providing technical assistance and support to identify which innovators are investor-ready, while helping innovators themselves gain a greater understanding of their own readiness. SWFF will take significant strides towards balancing the need for streamlined, cost-efficient and cost-effect support and the need for local support that is demand-driven. Lastly, SWFF will continue its work to strengthen innovators’ gender focus without imposing gender norms that lack cultural context in the next year of the program.