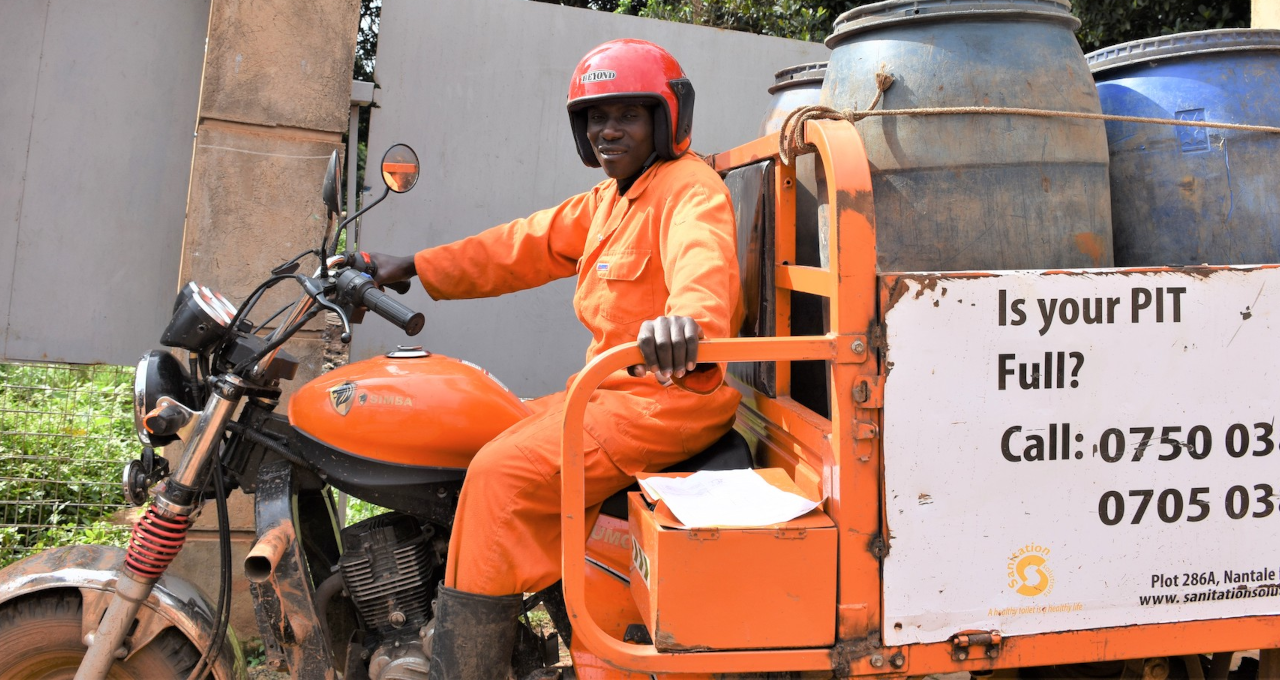 Kampala is a city of over 3.5 million people and only an estimated 180km of sewer lines, certainly below what is needed. In rapidly expanding urban environments like Kampala, fixed-point sanitation solutions such as pit latrines and septic tanks must be emptied, and the waste disposed of hygienically to avoid spreading disease.

The 25-year-old is a resident of Mulimila zone Kamwokya where he lives with his wife Sharon Mukyala and their two children, Theresa (four years) and Angel Topista Fuulumela (three months).

Before his current job, James was a favorite chapati vender for the gulper men in the area. A ‘gulper’ is a tool made locally from PVC piping to manually extract fecal sludge from pit latrines. Soon, James changed his livelihood and secured a job at SSG as a gulper man.

The memories of James’s first job in Kyebando Kawempe Division still linger in his mind. Despite using safety gear (e.g. facial masks, boots and gloves) he can never forget the foul smells, the awful shades, textures and gases from the fecal sludge that caused his eyes to water! As James drew the gulper in and out the pit to create the suction by which sludge is extracted, there was a revolting stench that wavered in the air; the sight was stomach-churning! “That was the filthiest place I had ever been in my entire life!” James narrates.

Notwithstanding this first experience, James’ urge to raise his family’s standard of living drove him to not give up.

This was the beginning of his journey as a professional pit emptier.

Among other challenges James faces society pressure stands out, and it sometimes spreads down to his family given the nature of this job.

Amidst the community pressure, James has grown to love his job, he does it with pride, poise and professionalism. James makes his work look easy and honorable, indicative of the adage “Well done is better than well said”.

USAID's Uganda Sanitation for Health Activity (USAID USHA), in partnership with private sector organizations such as SSG, supports private sector sanitation operators like James who do the ‘dirty jobs’ to earn their daily bread. The project recognizes those, like James, who place their dignity on the line, in the public eye, for the sake of allowing more people to benefit from safely managed sanitation. USHA salutes James and other gulper men who suffer social stigma to provide this invaluable public service.

USAID USHA intends to make investments that will create a more favorable environment for gulper men’s businesses to thrive and assist them to earn the social respect that they deserve.

James nurtures big dreams. Among others, he hopes to own a stand-alone house in a safe neighborhood for him and his family. Thanks to his work as a gulper man, he has managed to buy land in his home village. Reflecting on his story, James offered some advice to youth looking for work, “Don’t look down at honest jobs. There is reward in working hard at any task you have been given. ”