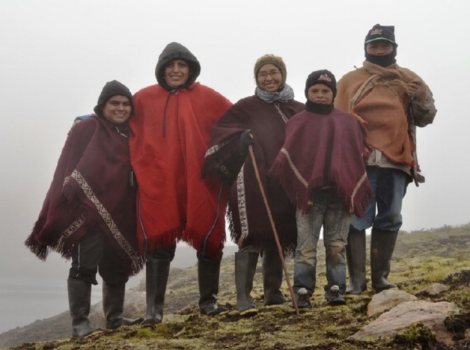 This PEER Science project considers Andean headwaters, particularly páramos and puna wetlands, as socialecological systems (SESs) in which coupled natural and human processes like drought, flooding, water use and impoundment in reservoirs for irrigation, and mining act together to destabilize and threaten water availability and quality for human and ecosystem purposes.

This project is expected to produce innovations in Andean headwaters characterization methodologies by combining use of satellite imagery (optical and radar), products derived from their analysis (e.g., land use and land cover change), and field data (e.g., precipitation, runoff, and water use, including socioeconomic characteristics).

These methodologies will allow the researchers on the project to identify headwaters, quantify their extent, and define indicators for assessing their dynamics.

In turn, cross-correlation analysis between these indicators and climatic and anthropogenic drivers, such as El Niño Southern Oscillation events and mining operations in headwaters, for instance, will lead to the establishment of characteristics that make Andean river basin headwaters vulnerable to global change.

A second important contribution of the project will be the integrated assessment of Andean páramos and puna wetlands, which are far less studied than glaciers but play an even more crucial role in the hydrology of the majority of Peru’s Andean basins and hence in the provision of water to coastal regions. According to the Autoridad Nacional del Agua, glaciers play a primary hydrological role in Vilcanota (Cusco) and El Santa (Ancash) basins, whereas headwaters wetlands are far more pervasive but not adequately identified, much less assessed from a water management perspective.

These studies are important in providing quantitative evidence for reconstructing past climates in the area. Such information will allow the researchers to establish possible effects of historical El Niño events and determine whether long drought periods and climate change processes occurred in the past.

The results of the project will include development of a satellite-based monitoring system for assessing biophysical changes in Andean headwaters and creation of case-study documentation of human dimensions of global and local changes affecting the headwaters regions of the basins, with particular emphasis on water use and quality degradation.

Capacity-building activities as part of the Geophysics Masters's Program at the Universidad Nacional Mayor de San Marcos will also be expanded.