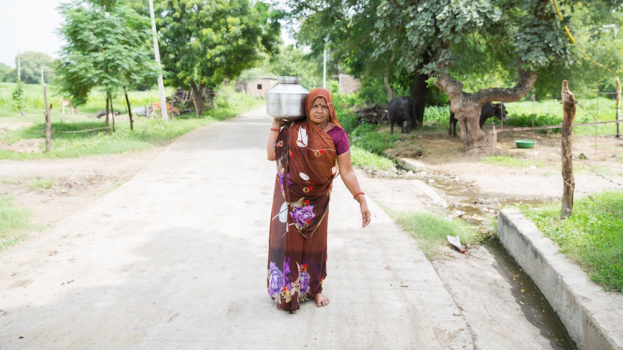 A baseline study in Madhya Pradesh, India, found that the majority of respondents travel off premises for water and that can take an average of 11.7 hours of their time every week. Photo credit: GAP Inc.

Addressing the water, sanitation, and hygiene (WASH) needs of females is one of the key priorities for achieving gender equity. Women and girls often have the primary responsibility for managing household water and sanitation—a burden that presents health and safety risks and limits their opportunities for advancement. To address this challenge, USAID and Gap Inc. launched the Women + Water Alliance (W+W Alliance) in 2017 to improve and sustain the health and well-being of women and communities touched by the apparel industry in India. On behalf of the W+W Alliance, the Institute for Development Impact carried out a baseline study in Madhya Pradesh, India, along the Narmada River basin (in the W+W Alliance’s implementation districts of Dewas, Dhar, Indore, Khandwa, and Sehore) to measure relevant women’s empowerment and WASH indicators. Some of the key findings from this study are summarized below.

Eight out of ten households must travel outside their plot or yard to collect water, which is time-consuming and stressful to a majority of respondents. While most households along the Narmada River basin have an improved [1] main water source, their water access is still behind the state and national levels. Close to two out ten households do not have access to water within a 30 minute walk year around. Access is particularly scarce during summer months when only 5.5 percent of these households have access to water.

On average, households that access water off-premises spend 11.7 hours per week on water collection. Since adults of working age, mostly women, are responsible for water, this burden has an effect on their productivity, income, and stress levels. It is estimated that an average adult woman traveling for water loses 891 Indian rupee (INR)/month ($12.26) and a man loses INR 1,149/month ($15.81) in potential wages, which is almost 15 percent of monthly minimal wage earnings for women and men, respectively.

Despite time-consuming trips to collect water and seasonal variations in access, household satisfaction with the water source is widespread and almost all report sufficient water for cooking and drinking. Not all households that express dissatisfaction with their water facilities take the next step toward making investments in improvements, often because they lack household capital. Hence only a few households (9 percent) plan to improve their water access to reduce time spent on collection, and women face limits in making such decisions.

While women may often be in charge of holding money, they are not usually able to make decisions on how to spend it. Most women (89 percent) are involved in a mix or all household WASH decisions, but when financial resources are concerned, they are often not the ultimate decision-makers. A woman’s voice is heard in the process, but the head of household, most often male, makes the final decisions.

Room for Improvement in WASH Practice is Substantial

Nearly one in three surveyed women do not practice proper handwashing technique, which can pose health risks to themselves and their families. In addition, while correct water treatment and storage is key to reducing incidence of disease and improving public health in contexts where homes do not have piped water, more than 90 percent of households use incorrect storage practices and fail to adequately treat their water to make it safe to drink.

W+W Alliance is working to create large-scale change in how water is managed and the role of women in decision-making by leveraging expertise, resources, and innovative approaches from a consortium of partners from civil society, the private sector, and government. CARE through Gap Inc.’s P.A.C.E. program, WaterAid, Water.org, the Institute for Sustainable Communities, the International Center for Research on Women, and the Institute for Development Impact are working together through the W+W Alliance to unlock the potential of women in communities touched by the global apparel industry. 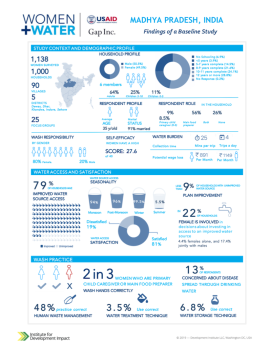