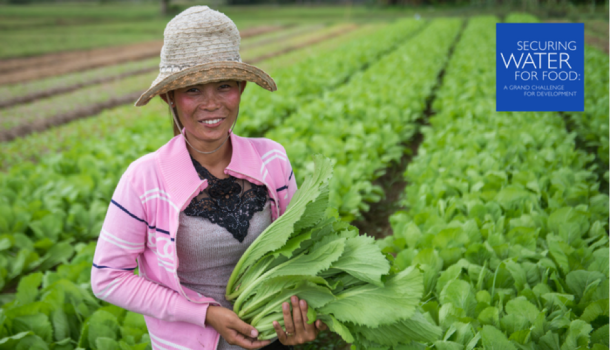 This female smallholder farmer gathers her crop at the peak of the harvest season. Photo credit: Project Alba, an SWFF innovator that provides technical support to and works with farmers in drought-affected Cambodia to reduce risks and to increase yields and income.

Currently, more than 1.5 billion people live with water shortages for at least part of the year. Those water shortages often threaten their farms, livelihoods, and families. Since its inception more than three years ago, the Securing Water for Food (SWFF): A Grand Challenge for Development has made significant progress toward its overall goal of producing more food with less water and making more water available for the food value chain, and has met and, in most cases, exceeded the expected outcomes envisioned when the program was created.

To date, SWFF innovators have helped farmers and other customers save or reallocate almost 10 billion liters of water to the food value chain, help produce nearly 3 million tons of food, and reach nearly 3 million farmers and other customers. More than 2 million hectares of rangeland and cropland are under improved practices due in part to SWFF innovations. Innovators have also leveraged SWFF funding for almost $20 million in additional funding through more than 150 partnerships and achieved more than $3.5 million in sales.

With significant effort from SWFF innovators, the SWFF program’s lessons learned inform more cost-effective, cost-efficient choices and increase the likelihood some innovations will reach sustainable scale by the end of the program.

To augment the grant funding SWFF innovators receive, the SWFF program funds a hybrid incubator-accelerator that works with innovators to identity barriers to organizational growth and scaling and provides financial and acceleration support through high-impact service providers to help innovators overcome those barriers. Since its inception, the TA Facility has delivered 131 business service engagements (total value over $1.1 million) directly to innovators. For every $1,000 spent by the SWFF program, SWFF innovators have positively impacted 160 customers/end users, produced 140 tons of produce, saved 1 million liters of water, improved water management on 44 hectares of land, and generated $110 of sales.

As many innovators approach the end of their SWFF award periods, working capital has become a bottleneck for growth. While some innovators have exited the program with more than enough capital for their growth over the next 2-3 years, others are looking for additional investment from investors, foundations, and donor governments.

One of SWFF’s major foci over the last few years of the program will be to build upon its early efforts to identify external sources of capital and, in some instances, connect innovators to those funding sources where there is a mutual alignment. Toward this end, in future years, SWFF may be combining efforts with the Powering Agriculture Grand Challenge for Development to connect social impact investors to later stage innovations at the nexus of water, energy, and agriculture.

Since 2013, USAID, Sweden through the Swedish International Development Cooperation Agency, the Government of South Africa, and the Ministry of Foreign Affairs of the Kingdom of the Netherlands have invested $35 million and provided critical acceleration support to promote science and technology solutions that enable the production of more food with less water and/or make more water available for food production, processing, and distribution. Additional information and research findings can be found in the 2017 Securing Water for Food Annual Report.