Realizing the Scoop on Poop in Ethiopia’s Lowland Regions 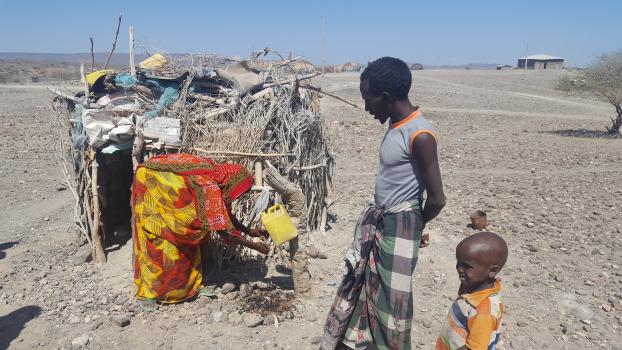 Following several months of activity-related CLTSH implementation and close analysis of monitoring data, our team noted that the challenging operating conditions of the lowlands translated into highly variable ODF kebele certification results. The team decided to pivot and reevaluate our interventions to improve effectiveness. To help guide the process, we applied USAID’s Collaborating, Learning and Adapting (CLA) framework in collaboration with USAID/Ethiopia.

We began by really focusing on understanding the challenges and variability of CLTSH success and subsequent ODF outcomes in the pastoralist context. We initiated a higher degree of engagement through increased field visits and re-evaluated OWNP ODF definitions with stakeholders, particularly local/national government officials, local change agents and mobilizers, and pastoralist communities. Next, we convened stakeholder meetings to discuss constraints to the CLTSH approach, all the while focusing on the pastoralist context and our lessons learned.

Throughout the process, we have recognized the importance of continuing to advocate with government officials. To date, the USAID Lowland WASH Activity has certified 93 kebeles as ODF, catalyzing basic sanitation access for more than 60,000 pastoralists. Our aim has been to work closely with these officials to re-evaluate the details of the CLTSH approach and ODF-level definitions to ensure that the approach and definitions really fit the OWNP and lowland pastoralist context. In parallel with these actions, we have also continued to leverage USAID/Ethiopia’s network of experts and applied research on how to better accomplish ODF efficiently in pastoral communities.

Based on these field efforts, we submitted our CLA example, “The Scoop on Poop: How ODF Data Led to Activity Program Pivots in Ethiopia’s Lowlands,” to the 2018 CLA Case Competition. Out of 127 case studies submitted globally by implementers and USAID missions, the Lowland WASH activity submission was one of only 10 winners. We are proud of both this recognition and our collaboration to address the underserved pastoralist communities of Ethiopia. And that’s the scoop!