The Business of Waste: Professionalizing Septic Tank and Latrine Desludging in Indonesia 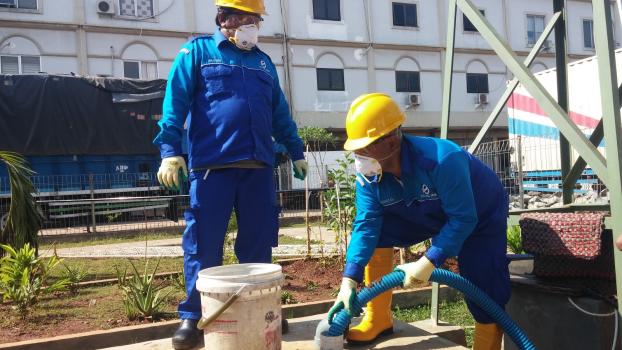 The majority of Indonesia’s urban poor, like most urban poor in developing and low-to-middle income countries, rely on onsite sanitation. Indonesia has made progress in the sector, with 77 percent of its population having access to at least basic sanitation, such as a pit latrine or septic tank. However, the vast majority of Indonesia’s urban human waste is still not being safely captured and managed before it is released back into the environment. Until recently, most urban Indonesians were dependent on informal, unregulated on-call fecal sludge removal—but at a price. Desludging fees were highly variable and unregulated. Septic tank maintenance occurred irregularly, if at all. Desludgers engaged in unsafe collection and transportation practices. And perhaps most troubling—illegal dumping of human waste into nearby rivers or canals was commonplace due to a combination of limited treatment infrastructure capacity and the appeal of cost and/or time savings for desludgers.

Emerging evidence highlights the clear and important linkages among exposure to untreated fecal waste, childhood stunting, and human capital. Poor sanitation and water quality, along with associated diarrheal diseases, rank among the leading risk factors for stunting worldwide. With approximately 9 million of its children under the age of 5 suffering from stunting, Indonesia is no stranger to these adverse social and human capital impacts.

In response, the USAID–funded Indonesia Urban Water, Sanitation and Hygiene Penyehatan Lingkungan untuk Semua (IUWASH PLUS) project launched the Regular Desludging Services or Layanan Lumpur Tinja Terjadwal (LLTT) Guidelines. Endorsed by the Government of Indonesia (GOI), the LLTT Guidelines now serve as the principal authority and primary driver in formalizing Indonesia’s desludging services across the country. The guidelines detail a 14-step process for creating LLTT, including the establishment of a cost recovery tariff model. Now, with additional support from the GOI and several donor agencies, the guidelines are being rolled out nationwide. For the first time, 40 cities across Indonesia will establish regulated, scheduled desludging services using the LLTT Guidelines—and benefit hundreds of thousands of households.

The LLTT Guidelines is a product of the experiential knowledge gained during seven years of planning and implementing scheduled desludging services across six Indonesian cities. USAID through DAI–implemented IUWASH and IUWASH PLUS worked in close collaboration with the GOI to take a comprehensive, systems approach to improving fecal sludge management along the full service chain.

Establishing, regulating, and monitoring scheduled desludging services at national and local levels has been a game changer for Indonesia’s urban centers. But as LLTT is scaled across the country, and demand grows with Indonesia’s rapid urbanization, it will be important for the country’s local and national governments to continue investing in treatment infrastructure. With land and financing limited,  emerging evidence surrounding the viability of off-grid, small scale treatment plants may offer additional promise for Indonesia. Reductions in treatment cost, gained from new technology, could translate into meaningful incentives to institutionalize proper disposal of fecal sludge in Indonesia, helping to accelerate the country’s progress toward safe water, sanitation, and hygiene services for all.