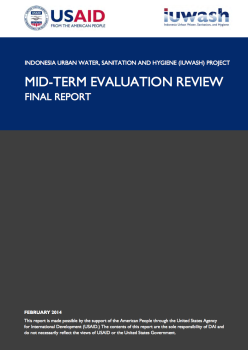 At the mid-point of the project, IUWASH is now well advanced towards meeting its objectives. Its contributions are much appreciated by central government, not only for its support to the water and sanitation sectors in respect of its own statement of work, but also because of its leverage of other GOI and donor investments and technical assistance, particularly so in respect of the evolving sanitation sector. This is due to its coverage of more than 50 local governments and PDAMs in five culturally, socially and physically diverse geographic regions, the extent of which is almost certainly unique in the area of hands-on technical assistance in Indonesia. Field visits demonstrated strong buyin by the local governments, as exemplified by the presence of the most senior officials at meetings. PDAM managing directors in North Sumatra delayed their departures for a national water supply convention in order to meet the evaluation team. Furthermore, when asked if additional TA would be welcomed, local governments and PDAMs had lists of further sector activities already prepared for discussion with the team.

At present, IUWASH is confident of reaching and exceeding nearly all its targets. This suggests that the overall development hypotheses of the project are still valid, as are most of the major assumptions on which the project design was based. The evaluation team considers that the three project components of demand, capacity and the enabling environment are mutually reinforcing and that outcomes targeted in each are linked, based on comments from stakeholders including the National Development Planning Ministry (BAPPENAS) and the World Bank. Phasing of these components, however, is not linear, with the enabling environment of institutional reform and investment being especially important to facilitate the development of the other two components. The Mid-Term Evaluation Review (MTER) team examined the IUWASH methodology for the attribution of results in terms of progress towards achieving contracted targets. This was found to be reasonable, with results reported in considerable detail and, because of the detail and precision with which the outputs are recorded, capable of being independently audited.