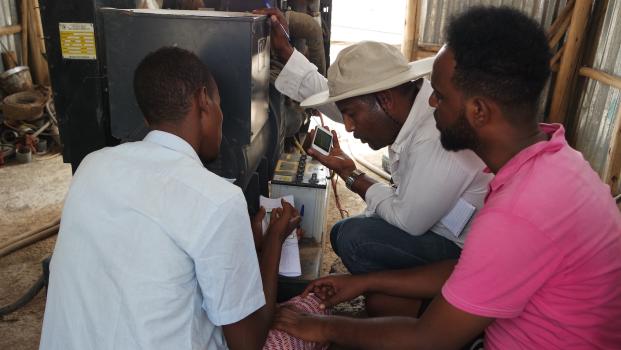 In December, John Hopkins School of Advanced International Studies joined with USAID implementer AECOM to host a panel discussion on Citywide Inclusive Sanitation (CWIS), a topic of particular interest as USAID expands its focus and shifts its thinking on how to address sanitation.

The panel included representatives from USAID, the World Bank, among others, and AECOM’s Darren Saywell served as the moderator. Panelists stressed the imperative of focusing on urban sanitation as exponential growth of urban areas is putting stress on municipal service providers. CWIS addresses urban sanitation shortcomings with a focus on four principles: delivering safe management along the whole sanitation service chain; prioritizing the human right of all to sanitation; committing to work in partnership; and recognizing that sanitation contributes to a thriving urban economy.

USAID’s representative Ella Lazarte was asked to describe some issues that people need to be aware of when planning for CWIS. Lazarte responded that multisectoral, collaborative work is critical, but has a cost, and she questioned who would pay for that cost. She mentioned that USAID has been trying to strengthen systems for sustainable WASH service delivery, particularly those related to governance and financing. For example, USAID’s, Sustainable WASH Systems Learning Partnership (SWS) has been learning more about what’s needed to bring people into alignment to create solutions to improve service delivery outcomes. SWS maps different actors, relationships, and the factors required to make services more sustainable and inclusive, which helps partners think outside the box to develop new solutions. Lazarte gave the example of the rapidly growing Ethiopian town of Debre Birhan where some groups had been left out of sanitation planning, such as the women’s associations that manage communal latrines. SWS will be hosting a webinar on Thursday, March 28 at 9 a.m. EDT on its experience collaborating with the World Bank to implement a CWIS approach to improved sanitation service delivery in Debre Birhan. Click here to register.

In response to an audience question, “What governance is needed to actually implement CWIS?” Lazarte answered that Indonesia is a good (though not perfect) example of country that has been looking nationwide at CWIS since 2005. She noted the importance of key elements such as political commitment, risk-taking to push the agenda from visionary technocrats, external funding for activities such as technical assistance and partnership support, and solid analysis. While good analysis does not often lead to good policies, a solid piece of analysis that is put into bite-size, understandable pieces for policymakers and the public can go a long way in galvanizing support. Such was the case with the Water and Sanitation Program’s Economics of Sanitation Initiative, which showed that Indonesia lost an estimated US $6.3 billion due to poor sanitation and hygiene, equivalent to approximately 2.3 percent of GDP, in 2006.

Her closing remarks advised thinking outside of the “WASH bubble” to consider more of a systems approach and how to pay for it all, citing property taxes as one possible source of revenue. She also noted the importance of exploring behavior change approaches that would both change mindsets and motivate people to adopt certain technologies or solutions.

Interested in hearing more? Click here for a recording of the full panel discussion. Or examine a compilation of resources on CWIS published recently by USAID’s Water Team in its biweekly newsletter Water Currents.

By Grace Tang of the USAID Water CKM Project