Connecting Innovators to the Marketplace 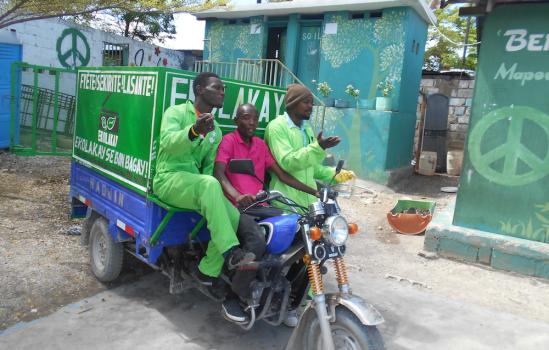 Members of SOIL’s EkoLakay team on their weekly collections round. Photo credit: SOIL

USAID’s Global Development Lab hosted an Innovation Marketplace at the 2017 Global Innovation Week in Washington, D.C., September 28 and 29. This is one of those truly inspiring events where creative and entrepreneurial minds are being applied to some of the world’s most intractable problems.

The marketplace featured demonstrations and presentations of life-saving new technologies as well as water, sanitation, and hygiene (WASH) sector innovators that are connecting with larger funders to scale up activities designed to solve an array of challenges, among them urban sanitation and diarrhea and respiratory illness in children.

Here’s a look at a few entrepreneurs doing interesting WASH work in different parts of the world:

SOIL (Sustainable Organic Integrated Livelihoods) is a nonprofit that that began working in northern Haiti in 2006 to develop a sustainable ecological sanitation solution for urban communities. Molly Case, deputy development director, spoke about the company’s founding, approach, and scalability. Dr. Sasha Kramer, who has a PhD in Ecology, founded the nonprofit and worked with local communities to “build a solution that is climate positive and disaster resilient,” says Case. That resiliency enabled SOIL to work in the challenging conditions of internally displaced persons camps in Port-au-Prince after the 2010 earthquake.

Today, SOIL’s EkoLakay toilet service employs a container-based approach to sanitation. EkoLakay is a household service where customers pay a monthly fee and receive a modular EcoSan toilet, which separates urine and solid waste into separate containers, with solid waste falling into five-gallon buckets that can easily be capped and removed. Households receive a supply of carbon-rich cover material (bonzodé, or good smell, in Creole) made of agricultural waste that is used for “flushing” and eliminates flies and odors. Every week the SOIL team collects the capped buckets. The waste is transported to a treatment facility where it is transformed into compost—a six-to-nine-month process. EkoLakay customers pay a monthly fee of approximately $3; SOIL anticipates the service will be fully financially sustainable in the next three to five years through a mixture of public and private financing.

One of SOIL’s ultimate goals is to establish a long-term public financing mechanism to support waste treatment and transformation, a public good that is heavily subsidized in wealthier nations. “We’d like to set up a public-private partnership with the Haitian government and international financing bodies to try and set the precedent that waste treatment is a public good and should be treated as such,” explains Case.

The WASH sector focuses much of its work on reducing diarrhea and respiratory illnesses, especially among young children. Often overlooked is the how dirt floors can make kids sick. Gayatri Datar, co-founder and CEO of EarthEnable, identified this problem after working in Rwanda as a Stanford business school student. She spoke about the transformation her company is making using locally sourced materials—dirt and sand—and a resin product designed by her co-founder, a biochemist at Stanford, to create inexpensive, durable, washable floors that are quite beautiful.

Ninety percent of rural households in Rwanda have dirt floors. Concrete is viewed as unsustainable and unaffordable. Datar cites the benefits of EarthEnable’s floors over concrete: the varnish hardens over time, it can be repaired, it’s significantly less expensive, and considerably more friendly to the environment. The company began marketing its product in Rwanda in 2014 and has since scaled up to four districts and into Uganda with the help of a Stage 1 Development Innovations Venture (DIV)  grant, one of the company’s earliest sources of funding.

The installation process takes two weeks for a household, and most are financing the purchase over time, usually room-by-room. “We are trying layaway options and microfinance options and also exploring bundling with solar,” she explains.

After only one month, 70 percent of households with the new flooring see reductions in illness, and nearly 50 percent are able to reduce health care spending. The company’s sales approach emphasizes pride in the attractiveness of the home, convenience, cost, in addition to the health benefits. EarthEnable has trained more than 100 masons to install the flooring.

Has she ever considered using her product to create a washable toilet slab? Says Datar, “We actually tried that on our latrine in the office, which is based in a village, and it’s been working out pretty well.”

Also participating in the marketplace was newly awarded Stage 1 DIV grantee Sanivation, another model of a non-sewered waste treatment service. Through partnerships with households, Kenyan municipal governments, and refugee camps, Sanivation collects and treats fecal sludge and transforms it into clean-burning charcoal briquettes. Former Stage 2 DIV winner Innovations for Poverty Action presented designs of its Soapy Water Handwashing Station, the Povu Poa, which integrates a cost-effective foaming soap dispenser with a hygienic, water-frugal tap in a secure and affordable design.

Two organizations take different approaches to water treatment: SPOUTS of Water is a social enterprise that produces the Purifaaya ceramic water filter, which is made of locally available materials and marketed to households in Uganda and South Sudan. An XL version has been designed for use in schools and refugee camps. Evidence Action deploys chlorine dispensers at water points in remote areas of Kenya, Uganda, and Malawi using a system of circuit riders on motorcycles to replenish and maintain the Dispensers for Safe Water and community promoters to train and motivate their neighbors to use them.

For a look at the many other high-potential innovators that USAID helps to support through the Global Innovation Exchange partnership click here.