What Does it Take to Sustain Water, Sanitation, and Hygiene Outcomes? Lessons from Six Ex-Post Evaluations 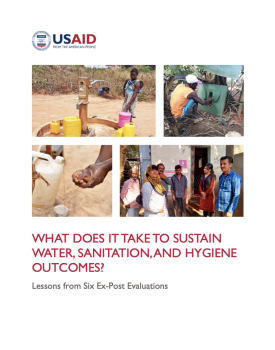 Through its commitment to identifying sustainable approaches to WASH, USAID commissioned a series of six ex-post evaluations of its WASH activities completed three to 10 years prior. These studies identified what outcomes had been sustained years later and why. This report shares key findings from the series. Findings are summarized according to finance, governance, management, and behavior change.

While global progress toward achieving Sustainable Development Goals (SDGs) to meet water, sanitation, and hygiene (WASH) needs is notable, the number of people lacking these essential services remains vast, and progress in the world's poorest countries has been sluggish despite decades of development interventions. Since 2000, access to at least basic water services has only increased from 51 percent to 56 percent in the least developed countries, and basic sanitation access has increased from 22 percent to 34 percent. As of 2017, 3 billion people lacked basic handwashing facilities. The health and economic implications are critical, as poor WASH conditions are linked to 2 million deaths annually and significant gross domestic product loss due to health and time burdens alone.

Lack of sustainability is a crucial barrier to progress, with evidence that 25 percent of water points fail within four years and frequent reports of slippage into previous open defecation habits. Sustainability has come more into focus in the last decade as WASH sector programming has evolved from a direct service delivery model to a systems approach oriented toward facilitating sustainable service provision through local actors.