USAID Investments in Drinking Water Supply Projects and Related Activities in 2004 - A Report to the U.S. House and Senate Appropriations Committees 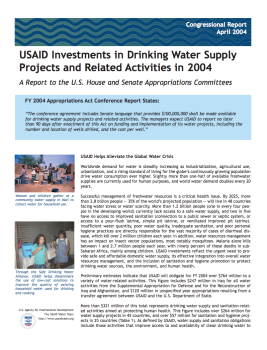 Worldwide demand for water is steadily increasing as industrialization, agricultural use, urbanization, and a rising standard of living for the globe’s continuously growing population drive water consumption ever higher. Slightly more than one-half of available freshwater supplies are currently used for human purposes, and world water demand doubles every 20 years.

Successful management of freshwater resources is a critical health issue. By 2025, more than 2.8 billion people — 35% of the world’s projected population — will live in 48 countries facing water stress or water scarcity. More than 1.2 billion people (one in every four people in the developing world) currently lack access to a safe water supply, and two in five have no access to improved sanitation (connection to a public sewer or septic system, or access to a pour-flush latrine, simple pit latrine, or ventilated improved pit latrine). Insufficient water quantity, poor water quality, inadequate sanitation, and poor personal hygiene practices are directly responsible for the vast majority of cases of diarrheal disease, which kill over 2 million children each year. In addition, water resources management has an impact on insect vector populations, most notably mosquitoes. Malaria alone kills between 1 and 2.7 million people each year, with ninety percent of these deaths in subSaharan Africa, mainly among children. USAID investments reflect the urgent need to provide safe and affordable domestic water supply, its effective integration into overall water resources management, and the inclusion of sanitation and hygiene promotion to protect drinking water sources, the environment, and human health.

Preliminary estimates indicate that USAID will obligate for FY 2004 over $764 million to a variety of water-related activities. This figure includes $247 million in Iraq for all water activities from the Supplemental Appropriation for Defense and for the Reconstruction of Iraq and Afghanistan, and $120 million in unspecified year appropriations resulting from a transfer agreement between USAID and the U.S. Department of State.