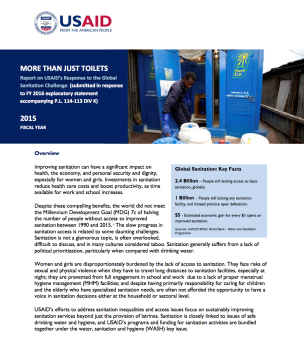 Improving sanitation can have a significant impact on health, the economy, and personal security and dignity, especially for women and girls. Investments in sanitation reduce health care costs and boost productivity, as time available for work and school increases.

Despite these compelling benefits, the world did not meet the Millennium Development Goal (MDG) 7c of halving the number of people without access to improved sanitation between 1990 and 2015. The slow progress in sanitation access is related to some daunting challenges. Sanitation is not a glamorous topic, is often overlooked, difficult to discuss, and in many cultures considered taboo. Sanitation generally suffers from a lack of political prioritization, particularly when compared with drinking water.

Women and girls are disproportionately burdened by the lack of access to sanitation. They face risks of sexual and physical violence when they have to travel long distances to sanitation facilities, especially at night; they are prevented from full engagement in school and work due to a lack of proper menstrual hygiene management (MHM) facilities; and despite having primarily responsibility for caring for children and the elderly who have specialized sanitation needs, are often not afforded the opportunity to have a voice in sanitation decisions either at the household or sectoral level.

USAID’s efforts to address sanitation inequalities and access issues focus on sustainably improving sanitation services beyond just the provision of latrines. Sanitation is closely linked to issues of safe drinking water and hygiene, and USAID’s programs and funding for sanitation activities are bundled together under the water, sanitation and hygiene (WASH) key issue.