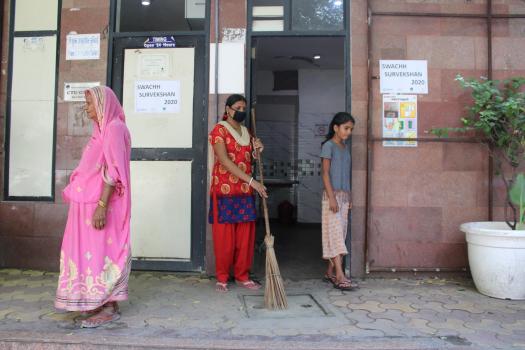 Public sanitation facilities have become a symbol of dignity, safety, and a source of income for several women of urban India—they are today not just users but also caretakers of community and public toilets built under Swachh Bharat Mission-Urban. Photo credit: CURE
Summary

For the fifth year in a row, the Government of India (GOI) celebrated the top ranked cities of India’s annual cleanliness survey, known locally as Swachh Survekshan, in a virtual ceremony presided over by Minister Hardeep Singh Puri and Secretary Durga Shanker Mishra of the Ministry of Housing and Urban Affairs. USAID received special recognition at the ceremony for its support for this competitive monitoring framework that currently assesses 4,200 urban local bodies (ULB) every quarter to measure improved sanitation outcomes.

U.S. Ambassador to India Kenneth Juster tweeted, “So pleased that @MoHUA_India & @SwachhBharatGov recognized @usaid_india at the Swachh Survekshan 2020 award ceremony. Through our partnership with the Government of India, the U.S. is committed to transforming water & sanitation services.”

So pleased that @MoHUA_India & @SwachhBharatGov recognized @usaid_india at the Swachh Survekshan 2020 award ceremony. Through our partnership with the Government of India, the U.S. is committed to transforming water & sanitation services. pic.twitter.com/Ay1A0nFUtW

Under Swachh Survekshan, states and cities participate in a friendly competition to improve their performance based on key cleanliness parameters. The goal is to improve the status of urban sanitation while encouraging large-scale citizen participation. These ULBs are ranked based on number of household and community toilets constructed; whether or not they are open defecation free and have in place door-to-door waste collection; the extent to which waste is treated; the amount of air pollution from waste; and whether its citizens reduce, reuse, and recycle, among other areas. The survey also takes into account the engagement of the citizenry, outreach and provision of social security benefits to sanitation workers (including informal waste pickers), and innovation.

USAID’s involvement dates back to the first year of the cleanliness survey in 2016 when the USAID/India’s project management unit team at the Ministry of Housing and Urban Affairs designed and implemented the survey in 73 cities. Every year since, the scope has significantly expanded to become not only a pan-India survey but one of the largest of its kind in the world.

“Swachh Survekshan, or the cleanliness survey, is more than a survey—it has become an effective tool for good governance, helped India achieve the goal of ending open defecation, and transformed the way the Government of India works to achieve other key development goals,” says USAID/India Acting Mission Director Ramona El Hamzaoui. The survey has become such a success that the Clean India Rural Mission and other GOI programs such as the National Health Mission and Indian Railways have replicated the framework as well.

USAID has supported the GOI’s flagship Swachh Bharat Mission—or Clean India Mission-Urban—since its launch in 2014 to address the significant gaps in sanitation coverage in urban India where more than 30 percent of the population resides. Swachh Bharat made noteworthy progress; more than 98 percent of urban India has been declared open defecation free, and several initiatives on sustainable sanitation have been introduced in the last five years. USAID shares the GOI’s vision of sustainable urban development, particularly its efforts to provide clean water and improved sanitation to the low-income urban population.

“COVID-19 highlights the importance of ensuring that everyone has access to safe water, sanitation and waste management,” adds Ms. El Hamzaoui. “We believe that with the right mix of technology, innovation, and partnerships, we can transform India into a country where WASH services are no longer a privilege, but a right given to all.”