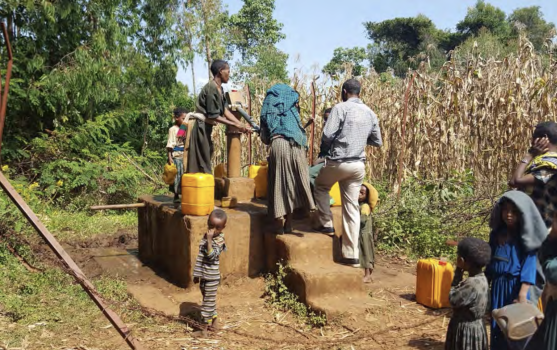 Despite of decades of efforts to improve water, sanitation, and hygiene (WASH) in Ethiopia, its key WASH indicators remain some of the lowest in the world. As of 2015, only 30 percent of the rural Ethiopian population had access to water that meets its basic needs; 4 percent used improved, nonshared sanitation; and 99 percent lacked any handwashing facility. With well over 14,000 children under 5 dying from diarrheal disease annually in Ethiopia, it is imperative that WASH development activities are effective, efficient, and have long-lasting impacts. As in other sub-Saharan African countries, sustainability has been a challenge in Ethiopia. For example, a 2010/2011 national WASH inventory rated 25 percent of water points as non-functional.This reflects growing, though limited, evidence across the sector of high rates of water point failure, sometimes just a few years after construction.The consequences are wasted money and time, disappointed communities, and dangerous health conditions.

In 2002, only 12 percent of Ethiopia’s rural population had access to an improved water source, and seven percent had access to adequate sanitation facilities.12 Water and sanitation-related diseases, particularly diarrhea, are the number two cause of death in Ethiopia followed by malaria and HIV/AIDS.13 Schools suffered from a lack of basic sanitation, and girls were frequently absent due to a lack of sanitation or due to household (HH) chores related to fetching water at a great distance from their homes. According to the MWA-EP’s baseline survey, completed in 2006, 76 percent of families inintervention areas had no access to an improved water source for daily household consumption. Women and girls were spending on average 57 minutes per day collecting water for their HHs.

How Can We Sustainably Increase Access to Water Services in Rural Areas in Ethiopia? Blog