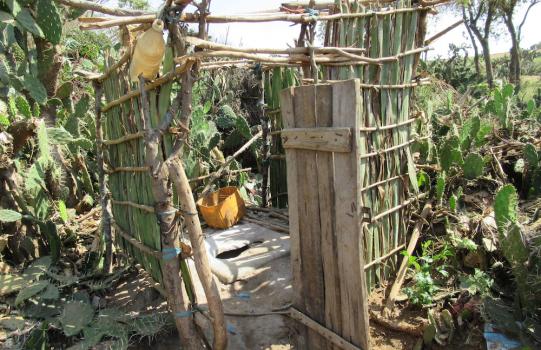 The Madagascar Rural Access to New Opportunities for Health and Prosperity (RANO-HP), implemented from 2009 to 2013, aimed to increase sustainable access to safe water supply, improve sanitation coverage, and expand hygiene practices for communities in Madagascar.

Through household survey and interviews with beneficiaries, the evaluation team explored barriers and facilitators of sustainability, focusing on activity’s sanitation and hygiene components. These included:

Villanova University recently completed a similar evaluation of RANO-HP and its sister activity RANON’ala, conducted during the same time period as this evaluation. It focuses on the sustainability of both activities’ water supply interventions.

How We Did It

The evaluation team addressed Question 1 through a replication of the RANO-HP endline quantitative household survey and sampling methodology in all 26 communes and re-verification of 69 villages previously declared to be open defecation free (ODF) using endline methodology.

The team analyzed 53 qualitative interviews with a variety of stakeholders in six communes to further explain quantitative results for Question 1, and to serve as the primary data source for addressing Question 2.

On the positive side, CLTS interventions helped produce large gains in sanitation coverage achieved. However, many of RANO-HP’s results were not sustained three years after the activity closed.

These findings led to several recommendations for future USAID programs, including:

About the Ex-Post Evaluation Series

The USAID Water Office is conducting a series of independent ex-post evaluations of the Agency’s water, sanitation, and hygiene (WASH) activities to inform future USAID investments in the sector and to better understand the long-term impact and sustainability of its interventions several years after projects close.

This evaluation series will help USAID understand whether and how its activity results have been sustained. All activities included in the series must have been closed for a minimum of three years and could not be recipients of Office of U.S. Foreign Disaster Assistance or Food for Peace funding. Preference is given to USAID missions that are at a point in their design cycle to incorporate learnings into upcoming WASH programs.

This evaluation series builds upon USAID and Rotary International’s WASH Sustainability Index Tool, a framework to assess a WASH activity’s likelihood to be sustainable according to the following factors: availability of finance for sanitation; local capacity for construction and maintenance of latrines; the influence of social norms; and governance.