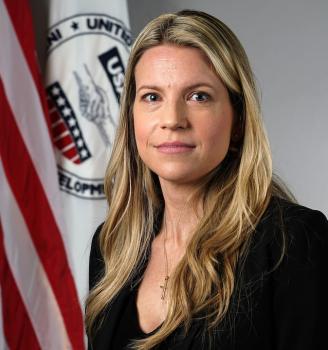 On September 12, 2019, USAID announced the appointment of Jennifer Mack as the USAID Global Water Coordinator. The announcement was made by the Agency Counselor Chris Milligan at an event in Washington, D.C., that focused on water, sanitation, and hygiene (WASH) partnerships, and marked nearly five years since passage of the Senator Paul Simon Water for the World Act of 2014.

As Global Water Coordinator, Ms. Mack will guide, oversee, and direct USAID's investments related to water security, sanitation, and hygiene. She will co-lead the implementation of the U.S. Government Global Water Strategy, in partnership with the U.S. Department of State, and oversee USAID's contributions to the strategy through its Water and Development Plan. She will also serve as the senior-most advisor to the USAID Administrator on WASH.

“At USAID we know that when safe water, sanitation, and hygiene are prioritized there is a ripple effect benefiting the neediest and most vulnerable. That is why we are elevating the role that water security and sanitation play in helping partner countries become more self-reliant,” said Ms. Mack. She added, “To create a water-secure world, we must help build strong governance systems and professional service providers that attract greater investment into the sector.

Ms. Mack is currently a Deputy Assistant Administrator for Food Security, and will continue this role in addition to her duties as Global Water Coordinator. Prior to her current appointment, Ms. Mack spent over a decade advocating for and working to improve U.S. foreign assistance. She served as chief of staff at Friends of the Global Fight Against AIDS, Tuberculosis and Malaria. Ms. Mack also worked at the U.S. Millennium Challenge Corporation in the Department of Operations and the Department of Congressional and Public Affairs. Ms. Mack earned an Executive Master of Public Administration in Global Public Policy and Management jointly from the Robert F. Wagner Graduate School of Public Service at New York University and the School of Public Policy at University College London, and earned a bachelor’s degree from Duke University.

She succeeds Christian Holmes, who served as the USAID Global Water Coordinator from 2011 to 2017, and James Peters, who served in the role in an acting capacity from 2017 to 2019.