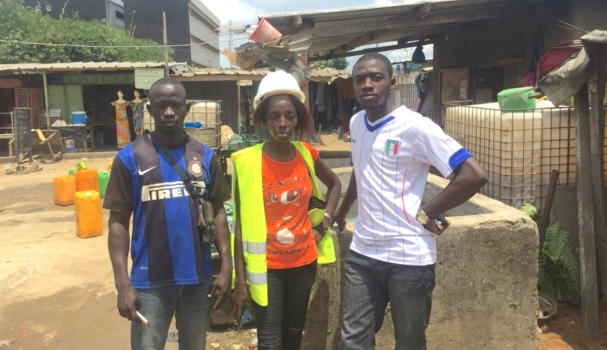 Judith poses with two of her colleagues at a construction site in Abidjan. Photo credit: Olivier Konan
Summary

“Initially, many people tried to discourage me by saying that [plumbing] was a job for men,” Ayé Judith Bodou explains. “But I didn’t give up.”

Judith’s choice to pursue a career in plumbing is unusual for a woman in Côte d’Ivoire. When she was in school, she also learned a more traditional trade—sewing. But she soon realized this wasn’t lucrative and threw herself entirely into a career of construction work and plumbing.

As a trained plumber, she’s the only woman working under the SaniPlus brand in Côte d’Ivoire, launched in 2018. The brand of quality sanitation products and services was developed and is supported by the USAID-funded Sanitation Service Delivery (SSD) Project implemented by PSI, PATH, and Water and Sanitation for the Urban Poor.

The SSD project, which operates in Côte d’Ivoire, Ghana, and Benin, aims to increase access to quality sanitation in West Africa. In Abidjan alone, 720,000 Ivoirians have poor quality septic tanks that overflow at least twice per year. This can expose residents to dangerous pathogens that cause a variety of diseases. Moreover, when a septic tank reaches its capacity, the connected toilets can no longer be used, thus forcing residents to find another place to relieve themselves.

Judith found SSD when she was identified by her neighborhood council to participate in a SaniPlus training.   After the training, Judith decided to focus her business on fabricating and installing SaniPlus products, including toilets, septic tanks, and soak pits. A few weeks later, the SaniPlus sales team referred her to Mr. Mamadou Bakayoko, who wanted to install a soak pit for his house in the suburb of Abobo.

In one day, she moulded seven concrete rings required for the soak pit construction at Mr. Bakayoko’s house. Judith completed the installation a few days later after the rings had dried. Judith installed the pit according to SaniPlus quality standards, providing an environmentally safe and long-lasting sanitation solution for the home. With a pit installed, he could separate shower water from toilet water and reduce the need for frequent and expensive septic tank emptying services.

“It really made me happy to see a woman doing what is usually a man’s job. And Judith does good work,” Mr. Bakayoko says confidently. “And I know that, with the sink installed, I will have to drain my pit less and less.”

Mr. Bakayoko even recommended Judith to his relative, whose compound had a soak pit that couldn’t handle his tenants’ sanitation needs. After an on-site assessment and three days of work, Judith installed a second soak pit at the compound.

Thanks to Judith’s impeccable work and dedication, Mr. Bakayoko continued to promote SaniPlus soak pits. In less than a week, Judith completed three SaniPlus jobs in his neighborhood, and to date, she’s built 23 soak pits in Abidjan and its suburbs. Judith is optimistic about the potential growth for her business and has expanded to conducting door-to-door sales and promotion visits to offer SaniPlus products and services to new clients.

She’s determined to take her business to the next level of success, and this time, with other women alongside her.

“I intend to encourage other women who want to do something in the field of entrepreneurship so that we can build toilets and sanitation facilities together,” Judith exclaims.