Exploring the Intersection of Women and Improved Water Access 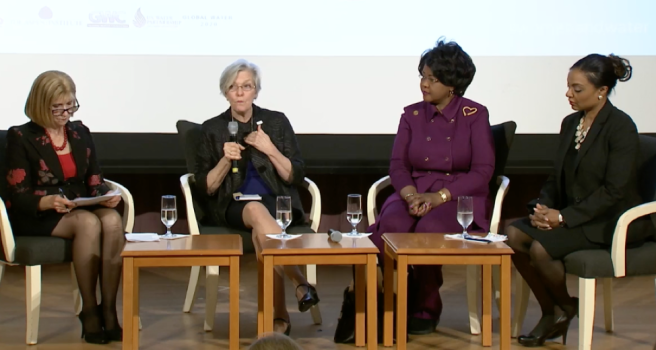 With International Women’s Day celebrated March 8 and World Water Day on March 22, it is a month for big ideas—about women and about water. On March 21, the intersection of these two crosscutting development issues and their respective global campaign days brought together advocates, practitioners, academics, and organizations passionate about championing women’s roles in improving access to water for a jointly hosted event titled “Call to Action: Supporting Women through Water.” The U.S. Department of State (DOS), USAID, the Aspen Institute, Global Water Challenge, U.S. Water Partnership, and Global Water 2020 organized the day, which centered around panel discussions featuring women, water and health implementers, and leaders from the public and private sectors. The event also included inspiring calls to action from celebrity water advocates Chris Long of Waterboys.org and Mina Guli of Thirst.

It was an energizing day as women took the lead talking about the most pressing issues facing women in water-scarce regions. Ambassador Marcia Bernicat, principal deputy assistant secretary, Bureau of Oceans and International Environmental and Scientific Affairs, DOS, opened the event discussing the challenges and risks associated with a lack of water and sanitation for women in particular, harkening back to her personal observations in Bangladesh—a country with both too much and too little water. She emphasized that diarrheal disease is 100 percent preventable and highlighted the importance of women as agents of change.

Lara Schulz, acting deputy assistant administrator of USAID’s water and sanitation portfolio, then shared the Agency’s perspective of how these two mutually reinforcing sectors contribute to key development goals. “When women lack decision-making authority in their homes or communities, they cannot participate in meeting their own water, sanitation, and hygiene needs,” Schulz noted. USAID and its interagency partners are helping to change that dynamic by bringing more women into the water and sanitation workplace. “This serves two purposes: Building a professional workforce with the skills to manage and maintain systems and therefore expand services over time; and offering women the opportunity to generate income when they might have otherwise been collecting water,” Schulz explained. She concluded with this thought: “The more women and girls can engage in a society, the stronger the society will be.”

NFL Player and Waterboys.org founder Chris Long introduced his organization’s work in Tanzania to provide clean water to 1 million people; Waterboys.org’s partnership with the Water and Development Alliance, a joint initiative between the Coca-Cola Company and USAID, will target 70,000 in need. Long noted that two-thirds of the people Waterboys.org supports are women and that they will be included in the entrepreneurship and maintenance training for the solar-powered wells it is helping to install.

Ultramarathoner turned water advocate Mina Guli gave one of the day’s most inspiring calls to action as she recounted her goal of running 100 marathons in 100 days to raise awareness about the water crisis. On day 62 she broke her leg and could not continue, but volunteers joined in around the globe to finish what she started with her #RunningDry movement. In describing her motivation she stated an African proverb, “Individually we can make an impact. Together as a community we can truly change the world.”

In the panel discussion “Supporting Women’s Empowerment Through Water in Action,” representatives from USAID, UNICEF, Mercy Corps, and the International Food Policy Research Institute (IFPRI) engaged in a lively exchange about applying lessons learned to future programming. Among the particularly interesting observations raised: In an effort to empower women on the ground, are we asking too much of them by encouraging women’s involvement in water user’s associations, agriculture groups, and village savings and loans associations? And as we endeavor to save women time, are we actually costing them time because of the emphasis on integrated programming? For these reasons, the panelists reiterated the importance of weighing opportunity costs. For example, is attending a particular meeting worth more to the women than remaining at home on any given day? Another thread included discussion on making data on women and water access actionable for policymakers. The transformational change that data are making includes the adoption of a policy in Burkina Faso to move entirely to a household water-delivery model. “Empowering women is sustainable and has spillover effects,” said IFPRI’s Jessica Heckert in a key takeaway from this session. “Women can help empower other women.”

The next panel featured global leaders providing their perspectives on key trends and how to drive meaningful progress toward achieving the 2030 global goals. Founder of Women Farmers Advancement Network Salamatu Garba explained that the women she works with in Nigeria have devised a more holistic term for WASH—changing it to “WASHING”—to encompass Inclusiveness, Nutrition, and Growth. Garba urged giving women a greater voice and more opportunities to translate policy into implementable action by sharing major policy documents with them.

For the private sector’s perspective, representatives from ACI Solutions, Procter & Gamble, and Gap Inc. as well as the NGO CARE discussed how their businesses support women across value chains and communities and the broader role they play in addressing gender and water-linked issues. For these companies, the benefits of investing in women are obvious—increased productivity, reduced absenteeism, women developing self-confidence and serving as agents for change to drive WASH improvements. Advice on maximizing the potential of partnerships included finding the synergies between parties and discovering the strengths each partner brings to the table. “We include women because they’re smart, have great ideas, and are half of society, not just because they are the biggest users of water,” concluded CARE’s Kelly Alexander in her call to action.

In the final panel of the day, global health advocates discussed how to reduce maternal morbidity through access to WASH in health care facilities (HCF). The shocking statistic that only 50 percent of health clinics globally have safe water and functioning sanitation facilities launched a conversation about the scope of the problem and how the WASH community is tackling the issue. As to scope, panelists suggested the lack of WASH capacity means that infection control is not possible. Indeed, new cases of Ebola in treatment facilities are being spread onsite, newborns are dying in hospital settings because of the lack of soap, and women are encouraged to give birth in hospitals where they can’t even get a clean glass of water to drink. To combat these pressing issues, USAID, interagency partners, and UNICEF have launched a Clean Clinic Approach with guidelines for achieving a healthy clinic environment. All the panelists agreed that prevention—of which WASH is a key component—must be emphasized and policies put in place to mandate minimum WASH standards for HCFs.

Dr. Alma Golden of USAID’s Bureau for Global Health described a recent trip to the Democratic Republic of Congo to observe Ebola treatment units and maternity clinics on the ground. “There’s really a deficit, in terms of WASH capacity and infection control in that area,” she observed. “Water’s not available, sanitation is not available, and it’s not convenient to wash hands between patients.” This is leading to a spread of infection in the clinics themselves.

The day concluded with a series of powerful statements. “Clean water is a human force multiplier,” said Sherri Goodman of the Woodrow Wilson Center. “It enables all of us to save lives, promote growth, and promote women’s empowerment.

And a restatement of Mina Guli’s remarks from earlier in the day, “You don’t need to be anyone to be someone. Every single one of us is capable of greatness.”