Are Nudges the Answer to Improving Handwashing Behavior? 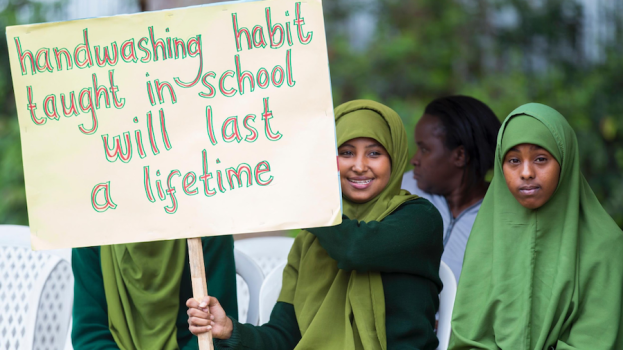 While handwashing has been acknowledged as a way to prevent the spread of infection, experts agree that we still aren’t making enough progress on increasing uptake of this behavior. A systematic review revealed that in 2015, only 26 percent of people globally washed their hands with soap after contact with feces.

Representatives of the donor, academic, implementer, and advocacy communities came together for a spirited discussion on this critical topic at the during the annual University of North Carolina Water and Health Conference held October 7–11, 2019. The subject of the session “What the Nudge? Integrating Nudges into Handwashing Behavior Change Programs” explored the theory and practice of nudging and how nudges are related to habit formation.

USAID’s Nga Nguyen began the talk with a look back at the history of approaches—from hygiene promotion, glow germ demonstrations, and reminders—that have been used as methods for changing handwashing behavior but have not been terribly effective at “moving the dial.” This is, in part, because handwashing is not like other behaviors. It’s a simple, but frequent behavior, very different, say, from building a latrine, which is significantly more complex but needs, ideally, to happen only once. She concluded by challenging the audience, “How can we think about behaviors differently so we can tailor our design and programming techniques to be more effective?”

Within the last few years, nudges have become a  popular behavior change topic. Nudges alter the environment so that people’s behavior changes in a predictable way—so people do the right thing. Key features of nudges: they don’t rely on changing people’s rational decision-making, they don’t ban something or make it structurally impossible, and they don’t change the incentives—like paying or bribing someone to adopt a new behavior.

They have been used in advertising, health care settings, education, and government programs to encourage more people to exercise, vote, and enroll in 401K programs.

In his presentation “Nudging for Habit Change,” Dr. David Neal clarified the common misperception that nudge and habit are the same thing. While the concepts are linked, they are distinctly different.

Habit is a description of a slowly learned behavior that has to be repeated frequently over time and is triggered by context. When people initially perform a new behavior, they use the prefrontal cortex located at the front of the brain. Only through repetition does this behavior shift to more primitive parts of the brain located in the back where the patterns are laid down. Nudges can be applied to trigger a one-time change or may be designed to support repeated behavior that, over time, will support habit formation.

Nudges that seek to create lasting change need to obey the laws of habit formation.

For a look at how these scientific principles are being applied to water, sanitation, and hygiene (WASH), Megan Williams discussed interventions her organization Splash is applying in schools and orphanages.  Through a process of rapid prototyping and testing, Splash staff determine which nudges are worth allocating time and money to implement in the handwashing and drinking water space. Williams described painting footsteps on a walkway from bathrooms to sinks in Ethiopia, an approach that proved difficult to implement  because local paint available in the market would rub off the dirt floors or be washed away by rain. However, installing mirrors over handwashing basins led to a significant bump (62 percent) in handwashing behavior.

Splash also makes significant investments in infrastructure to facilitate these improved behaviors, designing and installing their own handwashing and drinking water stations. Tweaks to the design during the prototyping included color coding (blue for drinking water, orange for handwashing) and making the basins different depths to encourage the behavior (shallow for handwashing, deep for drinking). These interventions will be  scaled across all schools in Kolkata, India, and Addis Ababa, Ethiopia.

The London School of Hygiene and Tropical Medicine’s Dr. Robert Dreibelbis concluded the session with an overview of recent nudge literature. He acknowledged that while everyone is interested in trying out nudges, the approach is often misunderstood. While some studies recommend “inexpensive nudges” as an alternative approach to behavior change, others conclude that their interventions cannot afford expensive nudge “infrastructure.”

Within the WASH sector, a recent experiment in Zambia explored how giving students  soap on a rope to take as bathroom pass led to significant  increases in handwashing behavior among the children. “We need to engage more in the concept rather than the intervention strategy itself,” concluded Dreibelbis. “Nudges can be incorporated into a variety of behavior change approaches…and can be part of our behavior change arsenal.”

If the Q&A session was any indication, implementers are hungry for workable ideas and academics and donors are eager to see what approaches are working in the field. It’s a ripe area for knowledge exchange, so stay tuned.

For more on the latest handwashing research, read the October 2019 issue of Water Currents.