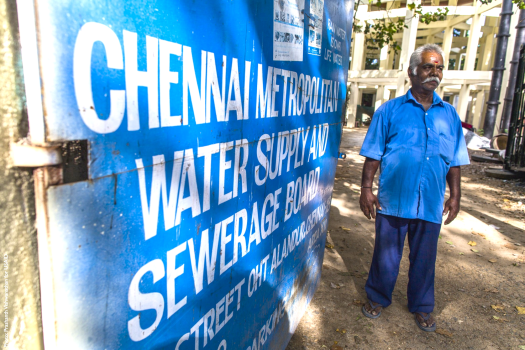 This edition of Water Currents focuses on World Water Day 2017. The theme of this year's observance, wastewater, emphasizes the key roles that proper wastewater treatment and reuse can play in improving public health and fortifying local water security.

USAID’s Be Secure Project in Iloilo Ends This Year. The Daily Guardian, March 2017. The Water Security for Resilient Economic Growth and Stability (Be Secure) project ends its work in Iloilo City and Province in July. A closeout ceremony for the Iloilo area will be held on March 10 to highlight the projects’ achievements on water security, sanitation, and climate resilience.

US: Working Globally to Improve Water Security—Salzberg. Nigerian Tribune, March 2017. United States’ Special Coordinator for Water Resources, Bureau of Oceans, Environment, and Science Affairs Aaron A. Salzberg convened a teleconference with journalists across Africa on transboundary water issues and the Water for the World Act. A journalist from Lagos summarized the discussions in this article, which includes responses to questions posed by other journalists in attendance.

Jibu: Accessing Affordable Water in East Africa. USAID, March 2017. Jibu is a social enterprise operating in Uganda, Rwanda, and Kenya that has received funding from USAID’s Partnering to Accelerate Entrepreneurship for a project to deliver affordable water to underserved urban populations. Jibu helps individuals own and operate their own businesses, while simultaneously creating a distribution network of entrepreneurs providing permanent access to affordable water across the developing world.

Luxor Wastewater Plant Expansion Promotes Health, Livelihood. Albawaba, March 2017. U.S. Ambassador to Egypt Stephen Beecroft and Luxor Governor Mohamed Badr participated in a groundbreaking ceremony on March 6 for the expansion of Luxor’s wastewater treatment plant. When complete, the expansion will nearly double the capacity of the system to provide wastewater treatment to residents of Luxor and El Bayadeya.

Good News for Ghana Sanitation Efforts. Rotary, March 2017. The Rotary and USAID partnership International H2O Collaboration is preparing to implement activities to improve water and sanitation conditions in 165 rural communities in Ghana. The projects will be designed to empower communities to be financially self-sustainable to support infrastructure maintenance; advocate with local authorities for equitable resource allocation; and develop innovations from lessons learned.

Arid Land to a Fertile Eden: Permaculture Lessons from Portugal. The Guardian, March 2017. Through simple practices of digging swales (ditches) and creating water retention spaces, Tamera, Portugal’s ecology experts have transformed an area on the brink of desertification—and say they can do the same anywhere in the world.

Circular Economy Could Save 11% of Annual Global Water Demand, Research Finds. Edie.net, March 2017. The adaptation of circular economy methods in water-stressed regions could save 412 billion cubic meters of water each year, equivalent to 11 percent of annual global water demand, according to new research.

Africa
Rwanda: Japanese Grant to Boost Access to Clean Water in Rural Areas. AllAfrica, March 2017. A Japanese government grant to two local organizations will supply water in the districts of Muhanga and Bugesera. The grant will provide access to clean water for 10,000 residents.

Latin America/Caribbean
Brazil Squatter Camp Pits Water Protection against Housing Needs. Thomas Reuters Foundation, March 2017. Local officials are trying to find a balance between protecting the housing rights of people with nowhere else to go and safeguarding the water supply of 4.7 million people who depend on the reservoir below the camp.

Middle East
Jordan Can Reduce Agricultural Water Use by a Third, Research Finds. Jordan Times, August 2017. An analysis of water and food security in Jordan indicates the potential for policies that reduce agricultural water needs, while still maintaining current levels of crop production.

Investors Pour $25 Million into Better Water and Sanitation in Latin America. Humanosphere, March 2017. Private-sector capital from the FEMSA Foundation, Coca-Cola Latin America, and the One Drop Foundation, along with Inter-American Development Bank funds, are being invested in water and sanitation in some of Latin America’s poorest countries. The initiative aims to improve water and sanitation for 200,000 people across Mexico, Guatemala, Nicaragua, Colombia, and Paraguay before 2021.

Conrad N. Hilton Foundation Pledges New Support for Trachoma Elimination Programs in Mali and Niger. Carter Center, March 2017. Efforts to eliminate blinding trachoma as a public health problem in the West African nations of Mali and Niger will receive US $11.725 million in additional support from the Conrad N. Hilton Foundation, to be implemented by the Carter Center, Helen Keller International, and Sightsavers.

The Cost of a Polluted Environment: 1.7 Million Child Deaths a Year. WHO, March 2017. The WHO report, Inheriting a Sustainable World: Atlas on Children’s Health and the Environment, reveals that a large portion of the most common causes of death among children aged 1 month to 5 years—diarrhea, malaria, and pneumonia—are preventable by interventions known to reduce environmental risks, such as access to safe water and clean cooking fuels. A companion report, Don't Pollute My Future! The Impact of the Environment on Children's Health, provides a comprehensive overview of the environment’s impact on children’s health.

Introducing Commercial Finance into the Water Sector in Developing Countries. World Bank Group, February 2017. This guidance note provides an introduction to the role of commercial finance in the water and sanitation sector. The note focuses primarily on commercial bank loans.

Can and Should Sanitation and Hygiene Programmes Be Expected to Achieve Health Impacts? Waterlines, January 2017. Studies show that a high level of sanitation usage and widespread handwashing practice are necessary to achieve significant health impact. Sanitation and hygiene programs may be justifiable even if they do not immediately achieve high levels of compliance and corresponding water supply improvements are not made; however, the justification should not be presented on the grounds of short-term health benefits.

Does Household Access to Improved Water and Sanitation in Infancy and Childhood Predict Better Vocabulary Test Performance in Ethiopian, Indian, Peruvian and Vietnamese Cohort Studies? BMJ Open, January 2017. The findings suggest that effects of WASH may go beyond subacute and acute infections and physical growth to include children's language performance, a critical component of cognitive development.

Does Targeting Children with Hygiene Promotion Messages Work? The Effect of Handwashing Promotion Targeted at Children, on Diarrhoea, Soil-Transmitted Helminth Infections and Behaviour Change, in Low- and Middle-Income Countries. Tropical Medicine & International Health, February 2017. Eight studies, targeting children aged 5–12 attending primary school, were included in this review. The reported effect of child-targeted handwashing interventions on outcomes of interest varied between studies. Of the different interventions reported, no one approach to promoting handwashing among children appeared most effective.

World Water Day 2017 – The theme of this year’s World Water Day, celebrated March 22, is “Why Waste Water?” and focuses on reducing and reusing wastewater. The majority of all wastewater is not reused or treated, and this not only pollutes the environment but it is also a waste of valuable nutrients and other materials. Resources on the official website include a wastewater factsheet, posters and a social media kit, and stories.

World Water Day: Live from the Vatican. Watershed, March 2017. On March 22, World Water Day 2017, Pope Francis will deliver an address from the Vatican intended to shift how the world values and understands its single most precious resource: water. His speech will be followed by a Watershed gathering of 400 thought leaders from around the world.

Crystal Moselle’s Documentary to Premiere on National Geographic on World Water Day. Vimooz, March 2017. The documentary “Our Dream of Water,” a film spotlighting the effects of the global water crisis, will make its world premiere on the National Geographic channel on March 22 in celebration of World Water Day. It focuses on the stories of women in Haiti, Peru, and Kenya and their daily struggle to find clean, safe water.

National Geographic Announces Airdates for Feature Doc ‘Water & Power: A California Heist’ and Limited Series ‘Parched,’ to Coincide with World Water Day. Futon Critic, February 2017. A series of programs will be shown in conjunction with World Water Day 2017. Water & Power will be broadcast on the National Geographic Channel March 14 and the three-part companion series Parched will debut on the channel March 21.