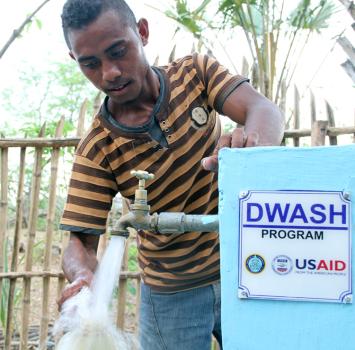 This edition of the newsletter, focusing on water utilities, includes studies on how water utilities perform in Pakistan and several African countries, and features a report on why a water utility in Bangladesh has emerged as a model for public water utilities across South Asia.

Global Waters. USAID, March 2017. The Water Office's online bimonthly magazine on Medium features a photo essay on wastewater and other features that tie in to this year’s World Water Day theme.

With Water Pours Out Hope: One Village in Tajikistan Builds a Better Future. USAID 2030, March 2017. Installing inexpensive water systems in Tajikistan's rural villages and towns with USAID support is enabling residents, who comprise 73 percent of the total population, to access safe drinking water in their homes.

Doubling Access to Safe Drinking Water: How Four African Countries Did It and How Others Can, Too. DAI Developments, March 2017. USAID’s Water for Africa through Leadership and Institutional Support project identified four common elements applied to local systems in Ethiopia, Rwanda, Senegal, and South Africa that contributed to meeting the Millennium Development Goal for clean water access to help other countries learn how to replicate their success.

Can the Amazon of Southeast Asia Be Saved? National Geographic, March 2017. This article features Zeb Hogan, who is leading a new, five-year research project, supported by USAID, called “The Wonders of the Mekong,” which brings together a multi-disciplinary team of researchers in an effort to generate greater awareness of one of the most extraordinary ecosystems on Earth.

A Chronic Crisis, Now Acute: WWF’s Recommendations for the First U.S. Global Water Strategy. New Security Beat, March 2017. This Wilson Center blog post provides recommendations that the Global Water Strategy be used to elevate water security as a new cross-cutting U.S. government objective and to streamline responsibility and authority across the various agencies and offices that respond to water-related risks.

Ken Conca on the Good, Bad, and Ugly of Water Conflict and Cooperation. New Security Beat, March 2017. In this Wilson Center podcast, Ken Conca, professor of international relations at American University, suggests a few guiding principles to minimize the chances of violent conflict and maximize the chances of sustainable, equitable development.

Tiger Worms: An Innovative Solution to Sanitation. Views & Voices, March 2017. In this podcast Oxfam’s Sophie Mack Smith explains how tiger worms are being tested in refugee camps and why they could be the answer to some of the world’s most challenging sanitation problems.

New Index Offers Snapshot of Global Water Security. Environmental Research Web, March 2017. Researchers have developed a new index for global water security. The index is based on a spatial analysis framework that encompasses multiple criteria relating to water security. The major inputs include availability, accessibility to services, safety and quality, and management.

Middle East​
Water Week: With Pervaporation Seawater Can Be Filtered in Minutes. Alberton Record, March 2017. Researchers at Alexandria University in Egypt have found a cost-effective desalination technology that can filter saltwater in minutes without using electricity.

Coca-Cola’s Global Giving Stays the Course: Water, Women, and Well-Being. Inside Philanthropy, March 2017. In 2016, Coca-Cola and the Coca-Cola Foundation gave a total of $106 million to more than 230 organizations around the world. Nearly all donations supported Coke’s “core sustainability priorities of women, water, and community well-being.”

CEO of Water.org on Bringing Water to 5 Million People through Social Impact Investing. Devex, March 2017. Devex moderated a discussion between Gary White, CEO of Water.org and Michele Sullivan, president of the Caterpillar Foundation at South by Southwest in Austin, Texas. This article summarizes White’s Q&A, which focused on how social impact investing could be the solution to bringing sustainable water access to millions.

Financing WASH Systems. IRC WASH, March 2017. In this podcast two experts talk about the challenges of financing water and sanitation services and the importance of public finance in reaching the Sustainable Development Goals.

Turbulent Waters: Pursuing Water Security in Fragile Contexts. The World Bank, March 2017. This report explores the dynamics between water insecurity and fragility. It suggests that water security is more difficult to achieve in fragile contexts because of a range of factors, including weak institutions and information systems, strained human and financial resources, and degraded infrastructure.

Interventions to Improve Facial Cleanliness and Environmental Improvement for Trachoma Prevention and Control: Review of the Grey Literature. International Coalition for Trachoma Control, March 2017. This report reflects a review and synthesis of the F (facial cleanliness) and E (environmental improvement) intervention landscape, as indicated by grey literature produced by the trachoma community.

Effects of Neighbourhood and Household Sanitation Conditions on Diarrhea Morbidity: Systematic Review and Meta-Analysis. PLoS One, March 2017. The findings suggest that, in addition to household sanitation provision, dual emphasis on neighborhood sanitation through public sanitation infrastructure provision and community-wide sanitation adoption is advisable to effectively reduce the diarrheal disease burden.

A Systematic Review: Costing and Financing of Water, Sanitation, and Hygiene (WASH) in Schools. Preprints, March 2017. The purpose of this review is to describe the current knowledge around the costs of WASH components as well as financing models that could be applied to WASH in schools. Results show a lack of information around WASH costing, particularly around software elements. Data are lacking overall for WASH in school settings compared to community WASH.

Sub-Saharan Africa’s Urban Water Blueprint: Securing Water through Water Funds and Other Investments in Ecological Infrastructure. The Nature Conservancy, 2016. This assessment demonstrates that catchment protection can play an important role in improving the quality and quantity of water for cities across sub-Saharan Africa. These benefits extend beyond the cities themselves to help sustain rural livelihoods and huge areas of critical biodiversity.

Performance of Water Utilities in Africa. World Bank Group, March 2017. This report describes the main outcomes and lessons learned from an assessment that identified and analyzed the main features of water utility performance in Africa. The report examines the efficiency of utilities and investigates the effect of institutional factors on utility performance.

Bangladesh: Thinking Small Helped Dhaka Save Water. Asian Development Blog, March 2017. The Dhaka Water Supply and Sewerage Authority has become a model on how to cut water wastage, by cutting non-revenue water, for public water utilities in South Asia. This was achieved through innovative approaches such as district metering, performance-based contracts, and trenchless technology.

The African Water Companies Serving the Poorest and Staying Afloat. The Guardian, October 2016. In Burkina Faso, South Africa, and Kenya, water utilities are finding innovative ways to reach the worse-off and remain financially sustainable. The success of these utilities shows that you don’t have to make a choice between being serving the poor and being financially viable.

Mobile for Development Utilities: The Role of Mobile for Improved Water Services in Urban Pakistan. GSMA, September 2016. While 61 percent of the urban population of Pakistan is covered by piped connections, water supply to customers remains unreliable and utilities experience heavy losses due to their inefficiencies with poor billing and repayment rates. The water utility of Faisalabad is an exception to the rule and could act as a champion for other utilities.

Urban Water Utility Reform: A Tool for Analysis and Dialogue. SECO, 2016. This tool offers guidance to stakeholders on where a utility is located in its development or reform process, successful reform paths, and accommodating the political context of the utility. The tool can support a structured dialogue among stakeholders in a utility reform process, the formulation of a utility-specific reform strategy, and the monitoring of reforms.

Providing Water to Poor People in African Cities: Lessons from Utility Reforms. TheWorld Bank, August 2016. This report analyzes the performance of 16 water utilities in Africa and discusses the successes, issues, and lessons learned from the analysis.