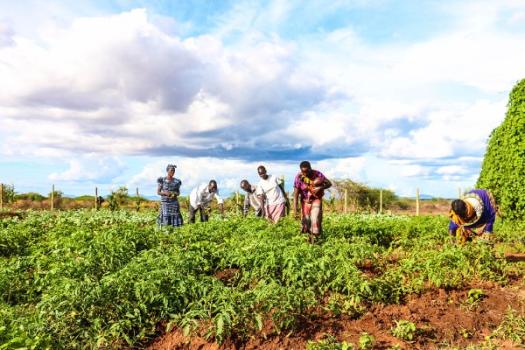 Pastoralism is defined by the practice of mobile livestock herding though the term also encompasses pastoral farming and enclosed ranching. While it sounds like an outdated and inefficient way of life, pastoralism is still seen as highly dynamic and intricately linked to the modern world in a way that contributes significantly to national, regional, and international markets, according to the International Institute for Environment and Development. But there is little doubt that this lifestyle presents significant health challenges and environmental pressures.

This issue of Currents takes a close look at recent studies documenting these challenges—from disease transmission to coping with water scarcity.

Seasonal Shifts in Primary Water Source Type: A Comparison of Largely Pastoral Communities in Uganda and Tanzania.  International Journal of Environmental Research and Public Health, January 2016. This study addressed the following questions: 1) To what degree do households in Uganda and Tanzania change primary water source type between wet and dry seasons? and 2) How might seasonal changes relate to water quality and health?

Are There Options Outside Livestock Economy? Diversification Among Households of Northern Kenya. Pastoralism: Research, Policy and Practice, February 2016. Income diversification has been hailed by policymakers as an important ingredient for building pastoral resilience. This study found that improved education levels and better access to water are important factors in encouraging adoption of non-livestock-based income-generating activities.

Sand Dams Protect Water for Drought-Hit Pastoralists in Kenya. Reuters, March 2017. The African Medical and Research Foundation has built sand dams that use concrete walls built across river beds to capture and hold rainwater in sand deposits. During the rainy season, the sand absorbs water, which can then be used in homes and for irrigation in the dry season.

Understanding Empowerment and Water Security with Pastoralist Women in Kenya. REACH, April 2017. This article discusses research underway that explores how empowerment for women in a Maasai community affects their roles in managing water supplies

Pastoralism and Land Tenure Security: Lessons from IFAD-Supported Projects. International Fund for Agricultural Development (IFAD), March 2017. IFAD follows a systemic approach to improving the governance of pastoral lands, which takes pastoral water as the entry point for interventions, and is built on respect for the pastoral system and the three pillars on which it is based: resources (water, land), society (families, chiefdoms, institutions), and economy (livestock).

Understanding Pastoralists and Their Water, Sanitation and Hygiene Needs. WaterAid, 2011. This policy brief summarizes the findings from a literature review and research carried out in northern Tanzania. The policy brief concludes with recommendations on how government and others can effectively work with pastoralist communities.

Antimicrobial Use and Veterinary Care Among Agro-Pastoralists in Northern Tanzania. PLoS One, January 2017. Frequent and unregulated use of antimicrobials in livestock requires public health attention as a likely selection pressure for resistant bacteria. This “One-Health” analysis suggests that livelihood and cultural niche factors, through their association with practices in smallholder populations, provide insight into the selection pressures that may contribute to the evolution and dissemination of antimicrobial resistance.

Exploring Local Knowledge and Perceptions on Zoonoses Among Pastoralists in Northern and Eastern Tanzania. PLoS Neglected Tropical Diseases, February 2017. Zoonoses (diseases that can be transmitted from animals to humans) account for the most commonly reported emerging and reemerging infectious diseases in sub-Saharan Africa. The findings of this study highlight the gaps in knowledge of zoonoses among pastoralists in Tanzania and the need to develop effective and locally relevant interventions.

Camel Health Management and Pastoralists’ Knowledge and Information on Zoonoses and Food Safety Risks in Isiolo County, Kenya. Pastoralism: Research, Policy and Practice, August 2017. In Isiolo County, Kenya, the main occupation and source of household income for pastoral communities is camel-keeping. This study investigated camel health management and its implications on zoonoses and food safety in the county.

Water Access, Sanitation, and Hygiene Conditions and Health Outcomes Among Two Settlement Types in Rural Far North Cameroon. International Journal of Environmental Research and Public Health, April 2017. High rates of fecal contamination in water sources were found in a study of pastoralist communities in northern Cameroon. The report cites open defecation as a likely contributing factor to diarrheal disease rates among children under 5, which were found to be higher in nomadic camps, compared to settled ones.

Boma to Banda: A Disease Sentinel Concept for Reduction of Diarrhea. Pastoralism: Research, Policy and Practice, July 2016. Diarrheal diseases can be debilitating, especially for children and young animals. In many rural areas, particularly pastoral communities, livelihoods are characterized by close interaction between household members and their livestock herds. Children often care for young animals, creating opportunities for the transmission of multiple zoonotic pathogens.

Wildlife-Related Zoonotic Diseases Among Pastoralists in Uganda. IDRC, December 2014. This video is about researchers from Makerere University who studied the impact of social and environmental changes on the health of pastoralist communities around Lake Mburo National Park. They assessed the impact of zoonotic diseases (those of animal origin) on animal and human health, and their effects on livestock value chains with a view to developing strategies to reduce risks and vulnerability.

Improving Water Security: Toolkit #1. Sustainable Water Partnership (SWP), 2017.  Providing WASH services to pastoralists is a challenge because water points attract ​their livestock herds that congregate and wait their turns for watering. While waiting, livestock graze and rapidly deplete the local vegetation. If the water point is close to an existing community practicing some form of settled agriculture, the over-grazing inevitably creates conflicts between farmers and herders. This is one example of why WASH activities cannot be sustainable without looking at the bigger picture of water security. Additional resources on water security can be found on the SWP website.

Intervention Pathways Towards Improving the Resilience of Pastoralists: A Study from Borana Communities, Southern Ethiopia. Weather and Climate Extremes, September 2017. In this USAID-sponsored study, the authors explain that focused interventions in infrastructure, livestock production, and environmental rehabilitation are vital to improve the resilience of pastoralists.

Institutions Put to the Test: Community-Based Water Management in Namibia During a Drought. Journal of Arid Environments, January 2016. When the rains failed in 2012–2014, the mobility of people and herds increased and put formal agreements to a critical test. The results indicate that cultural models of kinship and reciprocity took priority over formal agreements during the drought.

Empowering Pastoralists: How Mobile Technology Is Protecting Land and Connecting Communities. Exposure, April 2016. Using a smartphone camera and an app, pastoralists and land managers observe and document land use, soil properties, erosion, precipitation, and topography in their local environments. The cloud-based Land Potential Knowledge System was designed by USAID and the United States Department of Agriculture to address threats that pastoralists face.

Sustainability and Equity Aspects of Total Sanitation Programmes: A Study of Recent WaterAid-Supported Programmes in Nigeria. WaterAid, 2009. This report discusses the sanitation practices of a semi-nomadic group in Nigeria.

FAO Pastoralist Knowledge Hub – This hub is an initiative bringing together pastoralists and the main actors working with them to join forces and create the synergies for dialogue and pastoralist development.

International Institute for Environment and Development (IIED) – Drylands and Pastoralism – This website features IIED’s information resources on pastoralism in the dryland areas of East Africa, Ethiopia, the Sahel, and Sudan.

Five Takeaways from Stockholm World Water Week. Devex, September 2017. This article discusses some of the main themes emerging from World Water Week 2017. Among the hot topics: the promising new developments in urban sanitation and the increasingly urgent need to improve waste management.

World Water Week Emphasizes Value of Water. IISD SDG Knowledge Hub, September 2017. This article lists some of the reports and publications launched in conjunction with this year’s World Water Week.

Get Ready for Business Unusual in the World of Water. Greenzbiz, September 2017. Water Foundry’s Will Sarni blogs about the opportunities to exchange ideas and brainstorm new initiatives at World Water Week in his recap of various conference sessions and summary of notable announcements.

Sanitation and Hygiene in the SDG Era on the Agenda at World Water Week. WSSCC, September 2017. At the side event, “Reaching Scale with Equity: Innovations and Early Learnings,” held in partnership with USAID and others, Carolien van der Voorden from WSSCC’s Global Sanitation Fund (GSF) presented a new equality and nondiscrimination study, outlining the GSF’s approach to these issues as they relate to WASH.