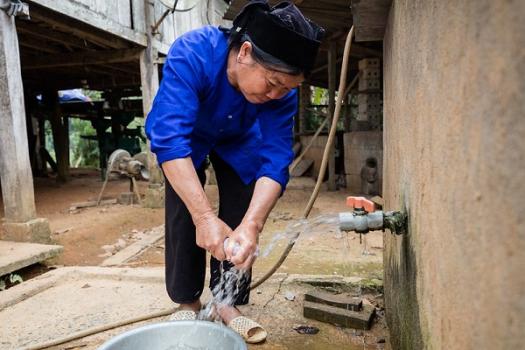 The provision of safe water, sanitation, and hygiene (WASH) is recognized as both a key intervention and a necessary component for the prevention and provision of care for all neglected tropical diseases. USAID’s Neglected Tropical Diseases (NTD) Program in the Bureau for Global Health contributed content and suggested this topic as a way to highlight the first-ever World NTD Day on January 30, 2020. World awareness days, such as this one, offer an opportunity to mobilize greater attention and action on priority issues, particularly in the countries and communities most directly affected.

Since 2006, USAID NTD support has expanded from five countries to 32 and resulted in the treatment of 1.3 billion people. USAID identifies which communities are at risk and targets its interventions, supports and facilitates mass drug administration, and monitors its results.

This issue of Water Currents updates the May 2019 NTD issue with USAID NTD resources and just-published studies on dengue, schistosomiasis, soil-transmitted helminth infections, and trachoma.

Overviews
WASH and Health Working Together: A ‘How-To’ Guide for Neglected Tropical Disease Programmes. World Health Organization (WHO), 2019. This toolkit provides step-by-step guidance to NTD program managers and partners on how to engage and work collaboratively with the WASH community to improve delivery of water, sanitation, and hygiene services to underserved populations affected by NTDs.

Safer Water, Better Health. 2019 Update. WHO, 2019.This report presents recent evidence on the links among inadequate WASH and disease, adverse health outcomes, and injuries. The WASH–attributable burden of 12 major diseases is analyzed and information is provided on effective and cost-effective interventions.

The U.S. Government and Global Neglected Tropical Disease Efforts. Kaiser Family Foundation, July 2019. Over the past 10 years, the United States has become more involved in global NTDs, launching its first NTD program in 2006 through USAID with a focus on seven NTDs that can be controlled and even eliminated with low-cost and effective interventions.

Dengue
Dengue and Severe Dengue Fact Sheet. WHO, April 2019. Dengue prevention and control depends on effective vector control measures. Sustained community involvement can improve vector control efforts substantially. The main mosquito vectors of dengue breed in and around human habitation and their eggs can remain dry for months and hatch when in contact with water.

The Current and Future Global Distribution and Population at Risk of Dengue. Nature Microbiology, June 2019. The geographical range of dengue is expected to expand in the coming years. This study provides projections of future changes in virus suitability and human population at risk for the years 2020, 2050, and 2080.

Implementation of Guppy Fish (Poecilia reticulata), and a Novel Larvicide (Pyriproxyfen) Product (Sumilarv 2MR) for Dengue Control in Cambodia. PLoS Neglected Tropical Diseases, November 2019. This study was designed to better understand the community acceptance and perceptions of two biological controls that would overcome insecticide resistance for consideration in dengue control strategies for the future. The author recommends that both mosquito control interventions be considered in future projects in Cambodia, which has one of the highest per-capita incidence rates of the disease.

Schistosomiasis
The Prevalence of Schistosomiasis in Uganda: A Nationally Representative Population Estimate to Inform Control Programs and Water and Sanitation Interventions. PLoS Neglected Tropical Diseases, August 2019. This study found the national prevalence of schistosomiasis was 25.6 percent among children ages 2 to 4 and that defecation behaviors of individuals were more strongly associated with infection status than household water and sanitation infrastructure.

Unavoidable Risks: Local Perspectives on Water Contact Behavior and Implications for Schistosomiasis Control in an Agricultural Region of Northern Senegal. American Journal of Tropical Medicine and Hygiene, October 2019. The findings highlight the capacity of local populations to participate actively in schistosomiasis control programs and the limitations of widespread drug treatment campaigns. Interventions that target the environmental reservoir of disease may provide opportunities to reduce exposure while maintaining resource-dependent livelihoods.

No More Neglect: Female Genital Schistosomiasis (FGS) and HIV. UNAIDS, December 2019. FGS results from untreated infection with Schistosoma haematobium that affects mostly women and girls who come in contact with contaminated freshwater bodies during their daily chores and livelihoods. This condition is under-reported and under-diagnosed and can leave those affected more vulnerable to HIV, however, it is treatable.

Domains of Transmission and Association of Community, School, and Household Sanitation with Soil-Transmitted Helminth Infections (STH) Among Children in Coastal Kenya. PLoS Neglected Tropical Diseases, November 2019. Findings from this study highlight the need for continued efforts, alongside deworming, to extend access to good sanitation facilities at homes, schools, and across communities.

Trachoma
Trachoma Fact Sheet. WHO, June 2019. Trachoma is a public health problem in 44 countries and is responsible for the blindness or visual impairment of about 1.9 million people. This sheet provides key facts and information on economic impact, prevention and control, and the WHO response.

Integrating Face Washing into a School-Based, Handwashing Behavior Change Program to Prevent Trachoma in Turkana, Kenya. American Journal of Tropical Medicine and Hygiene, October 2019. The integration of trachoma prevention messages into ongoing, widespread hygiene promotion programs in schools may result in the long-term practice of face washing, which could be effective when used at scale to contribute to the elimination of trachoma.

Unimproved Water Sources and Open Defecation are Associated with Active Trachoma in Children in Internally Displaced Persons Camps in the Darfur States of Sudan. Transactions of the Royal Society of Tropical Medicine and Hygiene, October 2019. Disease elimination in conflict-related settings presents a unique challenge for the trachoma community, and may require an innovative approach.

Associations Between Water, Sanitation and Hygiene (WASH) and Trachoma Clustering at Aggregate Spatial Scales, Amhara, Ethiopia. Parasites & Vectors, November 2019. Water access and facial cleanliness are important factors in the clustering of trachoma within this region. Intensified promotion of structural and behavioral interventions to increase WASH coverage may be necessary to eliminate trachoma as a public health problem in Amhara and perhaps other hyper-endemic settings.

WHO Reports 91% Reduction in Trachoma Prevalence in Weekly Epidemiological Record. International Coalition for Trachoma Control, July 2019. The number of people at risk from trachoma, the world's leading infectious cause of blindness, has been reduced by 91 percent from 1.5 billion in 2002 to 142.2 million in March 2019.

Prevalence and Associated Factors of Active Trachoma Among Children in Ethiopia: A Systematic Review and Meta-Analysis. BMC Infectious Diseases, December 2019. This study determined the prevalence of active trachoma in different districts of Ethiopia. Absence of a latrine, unclean faces of children, and no reported use of soap for washing are the important factors associated with active trachoma among children.

USAID NTD Resources
USAID Neglected Tropical Diseases Program – Over the past 14 years, USAID has supported 31 countries in Africa, Asia, and Latin America to fight NTDs. USAID’s support has enabled the delivery of medicines to one out of seven people globally, made possible by a $22 billion drug donation.

USAID Act to End NTDs West Program – This program, led by FHI 360, is working primarily in 11 West and Central African countries to eliminate seven of the most common NTDs. Act West is strengthening the capacity of national NTD programs and helping them better integrate across health systems.