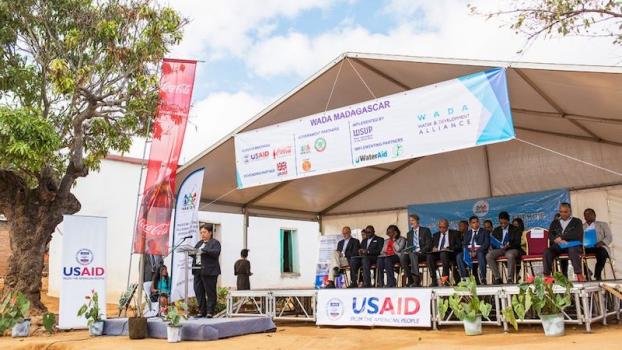 The Water and Development Alliance (WADA) Madagascar project will lead to better health and cleanliness through improved access to water, sanitation and hygiene (WASH) services

Antananarivo, Madagascar  – Today, the United States Agency for International Development (USAID) and The Coca Cola Foundation (TCCF), through their Water and Development Alliance (WADA) global partnership, launched a project to improve access to safe water and sanitation services for hundreds of thousands of people in three of Madagascar’s major urban centers. The project will be implemented by the nonprofit organization Water & Sanitation for the Urban Poor (WSUP).

“Clean drinking water and basic sanitation are essential to everyone’s health and well being,” said USAID Madagascar Acting Mission Director, T. Christopher Milligan. “This project will benefit more than 450,000 people in the cities of Antananarivo, Mahajanga, and Toliara and contribute to the Government of Madagascar’s goal of achieving universal access to WASH services by 2025 and eliminating open defecation by 2018.” TCCF, USAID and other funders are supporting WADA project activities with a combined investment of more than $5.3 million.

Julius Ambah, Coca-Cola Director for Islands and Mid Africa stated, “For the past six years, Coca-Cola has partnered with WSUP and JIRAMA, Madagascar’s state-owned provider of electricity and water, to provide clean water access in 18 communes here in Madagascar. We are honored to scale this work through our new partnership with USAID to serve nearly half a million.

Madagascar is one of the poorest countries in Africa and is urbanizing more than twice as fast as the rest of the world. Approximately one-third of the total population already lives in urban areas. Water supply and sanitation coverage are serious challenges. Diarrheal disease, which often results from a lack of sanitation and unclean drinking water, is the second most lethal illness among children under the age of five. The lack of significant investments over a long period, coupled with limited institutional capacity, has exacerbated the challenges of improving access to sustainable and affordable water and sanitation services in Antananarivo and other cities, particularly among low-income populations.

“Local communities are facing significant challenges around access to water, so innovative models to improve water services, like this partnership, are needed for sustainable change, Bringing together public and private sector funding and ideas, together with creative local solutions, will positively impact the people in my area.” said Luc Razafimahefa, Mayor of Anosy Avaratra, one of the local communities benefiting from the project.

In response to these challenges, the WADA-Madagascar project will focus on building the capacity of national institutions and local communities to effectively deliver and manage water and sanitation services. WSUP will work with JIRAMA, national and city governments, and local communities to provide water for low-income areas with limited water services. These efforts will improve people’s lives by increasing the number of hours and quantity of water supplied each day, improving water quality and pressure by building new infrastructure, and finding and repairing leaks in current systems to reduce water loss.

“With the support of USAID and Coca-Cola through WADA, we look forward to making a difference in the health, livelihoods and dignity of hundreds of thousands of Malagasy people,” said Sylvie Ramanantsoa, WSUP’s Madagascar Country Programme Manager. “This project will enable cities to deliver improved water and sanitation services to the poorest urban residents and give them the skills and resources to manage those services for years to come.”

The WADA-Madagascar project is also funded by UK aid from the Government of the United Kingdom, Dubai Cares, Cartier Philanthropy, OPEC Fund for International Development (OFID), and The Halcrow Foundation.