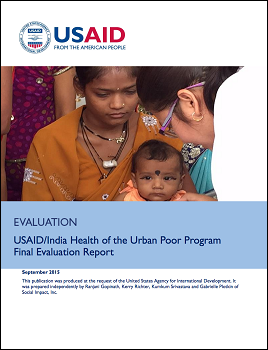 India has made progress in achieving health outcomes over the last decades, especially in rural areas; but the urban poor have generally not benefited. The delivery of health services in urban areas has been suboptimal and fragmented. As a policy response, in May 2013, the Government of India (GOI) launched the National Urban Health Mission (NUHM) to strengthen health service delivery in urban areas.

Since 2001, the United States Agency for International Development (USAID) has engaged in an active partnership with the GOI’s Ministry of Health and Family Welfare (MOHFW). In 2009, USAID initiated the “Health of the Urban Poor” (HUP) program. Within the context of the imminent launch of NUHM, the program was designed to support the central, state, municipal, and community health structures develop innovative policies and program strategies to better meet the health needs of the urban poor.

The Cooperative Agreement (for the total sum of 513,601,582 Indian Rupees (10,778,627 United States Dollars) was awarded to the Population Foundation of India (PFI) to provide support to USAID/India’s HUP program. HUP is the first USAID award made directly to an Indian non-governmental organization (NGO). GOI approval had not been obtained prior to awarding the Cooperative Agreement for HUP in September 2009, thus delaying program implementation for ten months. The program was originally planned for four years; however, one of the program design’s chief assumptions—which ultimately did not hold true—was a timely rollout of NUHM. At mid-term therefore, in the absence of NUHM and with the accompanying reluctance of state governments to initiate urban health activities beyond those mandated under the GOI’s urban reproductive and child health (RCH program), the HUP had been implemented for 18 effective months. Based on mid-term recommendations HUP was extended to September 30, 2015 in order to overlap with the launch of NUHM in 2013 and facilitate its rollout. The vii extension phase was redesigned to provide TA support to the national and state governments in rolling out NUHM, as well as to scale up lessons from its phase I cities to at least 20 cities.