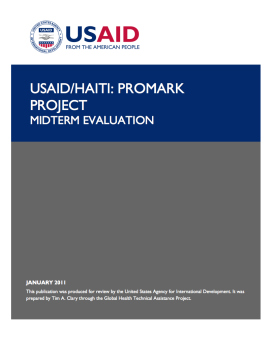 Even though there were some early problems in implementing PROMARK, nothing could have prepared the project, or any other stakeholder, for the events of 2010. On January 12, a 7.0 magnitude earthquake struck Haiti, killing more than 200,000 people and leaving more than 1.5 million homeless. In October 2010, a cholera epidemic quickly spread to all ten departments, killing more than 3,000 people. Political unrest, centered on the December 2010 presidential election, also hampered aid efforts. These events, combined with the already-low ranking of Haiti in the human development index, continue to challenge all partners.

Thus the midterm evaluation of PROMARK had to be accomplished in a difficult context. Rather than examining and evaluating PROMARK’s activities and results solely on intended targets, the evaluation team decided to look at systemic issues to produce a more useful review, assessment, and recommendations.