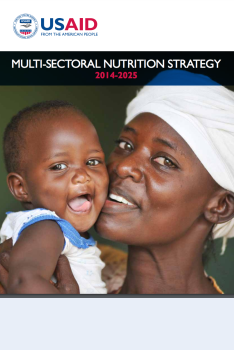 Optimal nutrition is fundamental to achieving USAID’s wider mission to end extreme poverty and to promote resilient, democratic societies while advancing our national security and prosperity. USAID’S 2014-2025 Multi-Sectoral Nutrition Strategy is the first of its kind at USAID. It is aligned with the 2025 World Health Assembly Nutrition Targets and reaffirms both USAID’s commitment to global nutrition, and our role as a major international partner in the fight against malnutrition. The Strategy’s multi-sectoral approach addresses both direct and underlying causes of malnutrition, and its focus on linking humanitarian assistance with development programming helps build resilience to shocks in vulnerable communities.

With this strategy, USAID aims to decrease chronic malnutrition, measured by stunting, by 20 percent through the U.S. Government’s Feed the Future and Global Health initiatives, the Office of Food for Peace development programs, resilience efforts, and other nutrition investments. Within Feed the Future targeted inventions areas, USAID will concentrate resources and monitor impact to reduce the number of stunted children by a minimum of 2 million. In humanitarian crises, USAID aims to mitigate increases in acute malnutrition with the goal of maintaining Global Acute Malnutrition (GAM) below the emergency threshold of 15 percent. In 2025, we see a world where countries, communities, and families have the capacity to achieve and sustain healthy, well-nourished populations.

While global progress has been made in improving nutrition, malnutrition continues to be a complex problem. Malnutrition has negative consequences on health, physical and cognitive growth, intellectual performance, and earning potential, constraining the advancement of countries where USAID works. In 2011, under-nutrition contributed to over 3.1 million (45 percent of ) child deaths worldwide.