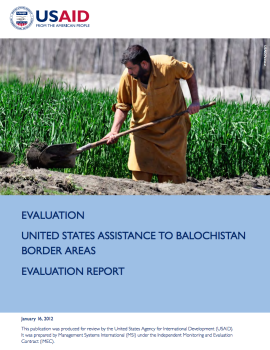 Balochistan is the least developed province of Pakistan, with levels of human development that are much below Pakistan’s, greater gender disparities, higher poverty, greater food insecurity, and poor infrastructure. Government allocations for development are small in relation to the size of the province and the spread of the population, and non-governmental organizations (NGOs) have a limited presence. Small farmers and the poor are unorganized, which, together with scattered settlements and low population density, makes service delivery much more costly than in other provinces. The poor have meager access to services. The operating environment for development projects has been especially testing in recent years in the presence of an insurgency and frequent targeted killings and kidnappings.

Implemented by the Food and Agriculture Organization (FAO) of the United Nations (UN), the United States Assistance to Balochistan Border Areas (US ABBA) project is working in five districts of Balochistan, namely, Killa Saifullah, Loralai, Mastung, Quetta, and Zhob. The project has been active in the first three of these districts since 2005, and in the other two since 2009. US ABBA aims to mobilize small farmers, promote agricultural development, and address rural poverty. The project portfolio spans social and human capital formation, community infrastructure development, the demonstration and diffusion of agricultural technology, and linkages between producers and markets. With a few exceptions, the activities promoted by the project are not new to the province.

Related: US ABBA Evaluation - Annex A