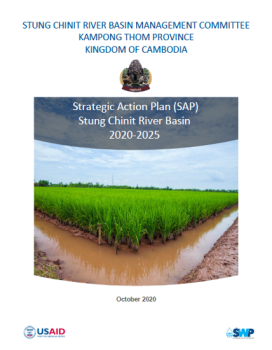 The Stung Chinit River Basin Management Committee, with support from the USAID-funded Sustainable Water Partnership (SWP), developed the SAP over years of work and collaboration by on-the-ground stakeholders. The river basin supports a population of more than half a million people, but a combination of factors including climate change, population growth, deforestation and agricultural pollution threaten water security. The objective of the SAP is “To promote sustainable development in the basin, with particular emphasis on water security and protection of biodiversity.”

The SAP is the result of a process of identifying, analyzing, and prioritizing basin-wide and localized water security risks and designing actions to mitigate and better manage those risks, all while simultaneously supporting sustainable development in the basin. The SAP was officially launched at a workshop on January 28, 2021.

It will be a critical tool for the Committee’s member institutions – including national government ministries; regional and local government bodies such as commune councils; and farmer water user committees – to collaborate and align water security improvements for upstream, midstream, and downstream communities in the basin.