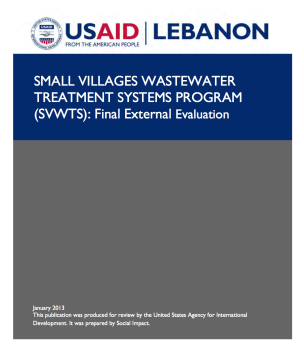 Acting under Mission Assistance Objective 4: “Improved water services for all in Lebanon”, and in recognition of the serious pollution problem occurring in the Litani watershed, USAID/Lebanon designed a project aimed at reducing the direct discharge of sewage into the Litani River. In coordination with other donors’ wastewater treatment infrastructure programs, and with a view to using low-cost, low maintenance, natural based sewage treatment technologies, USAID/Lebanon identified locations in the Upper Litani River Basin not currently served by wastewater treatment facilities as the best target for use of development funds that would support Mission objectives.

The proposed project, called the Small Villages Wastewater Treatment Systems (SVWTS) project, identified municipalities and unions of municipalities in the West and North Bekaa regions. Municipalities, rather than the Water Establishments, were seen as the target government institutions that had the means to operate and maintain the constructed facilities to the benefit of their constituents. The Government of Lebanon and the participating municipalities were engaged in the project through Memoranda of Understanding that described the responsibilities and duties of the signatories.

This version was updated 12 April 2013 and 26 August 2013, with a statement of differences from Camp, Dresser, Mckee and Smith.