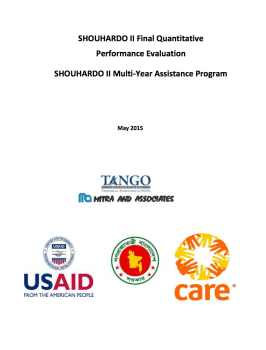 Despite progress on combating poverty and improving a number of other human development indicators, Bangladesh remained ranked 142nd out of 187 countries in the 2014 Human Development Index (HDI). Similarly, it ranked 57th out of 76 countries listed in the 2014 Global Hunger Index (GHI), placing the country in the category of “serious” levels of food insecurity. Although Bangladesh has meet the Millennium Development Goals (MGDs) for prevalence of undernourishment, there are still some 25 million people undernourished and progress has been slowing since the mid-2000s due to the inadequate consumption of the minimum daily-recommended amount of food and/or intake of highvalue food products. In addition to extreme poverty and food insecurity, vulnerable populations throughout the country cope with limited access to education and health services, widespread gender inequity, and repeated exposure to natural disasters and climate change. Despite improvement in economic indicators and progress toward the MGDs over the previous decade, undernourishment especially among women and children remains a major impediment to further development of the country.

It was within this context that CARE Bangladesh and Partner NGOs first designed and implemented the SHOUHARDO Development Assistance Program (DAP) from 2005-2010. The final evaluation of the first phase confirmed that it was largely effective in addressing not only the availability, access and utilization issues that lead to food insecurity, but also the underlying factors that contribute to vulnerability such as a lack of social participation and disempowerment that prevent people from realizing their full potential to lead healthy and productive lives.

The second phase, SHOUHARDO II, implemented from June 2010 to May 2011 in 11 of the poorest and most marginalized districts of the country, builds upon the successes of the initial SHOUHRDO program by maintaining a strong emphasis on improving livelihood security, food security, nutrition, poor and extreme poor (PEP), and women’s empowerment at the community level, while adding components aimed at strengthening local governance and improving adaptation to climate change. CARE Bangladesh implemented SHOUHARDO II with the assistance of 16 NGOs and 4 Technical Partners.