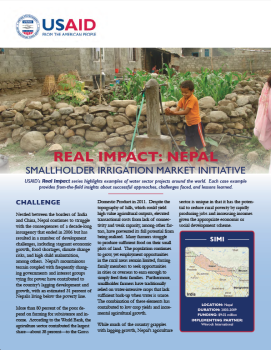 Nestled between the borders of India and China, Nepal continues to struggle with the consequences of a decade-long insurgency that ended in 2006 but has resulted in a number of development challenges, including stagnant economic growth, food shortages, climate change risks, and high child malnutrition, among others. Nepal’s mountainous terrain coupled with frequently changing governments and interest groups vying for power have contributed to the country’s lagging development and growth, with an estimated 31 percent of Nepalis living below the poverty line.

More than 80 percent of the poor depend on farming for subsistence and income. According to the World Bank, the agriculture sector contributed the largest share—about 38 percent—to the Gross Domestic Product in 2011. Despite the topography of hills, which could yield high value agricultural outputs, elevated transactional costs from lack of connectivity and weak capacity, among other factors, have prevented its full potential from being realized. Many farmers struggle to produce sufficient food on their small plots of land. The population continues to grow, yet employment opportunities in the rural areas remain limited, forcing family members to seek opportunities in cities or overseas to earn enough to simply feed their families. Furthermore, smallholder farmers have traditionally relied on water-intensive crops that lack sufficient back-up when water is scarce. The combination of these elements has contributed to low crop yields and incremental agricultural growth.

While much of the country grapples with lagging growth, Nepal’s agriculture sector is unique in that it has the potential to reduce rural poverty by rapidly producing jobs and increasing incomes given the appropriate economic or social development scheme.