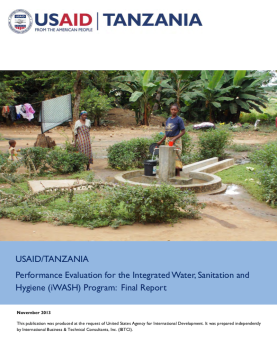 The goal of the Tanzania Integrated Water, Sanitation and Hygiene Program (iWASH) was to support sustainable, market-driven water supply, sanitation, and hygiene services to improve health and increase economic resiliency of the poor within an integrated water resource management framework.  Performance was reported measured against the following intermediate results:

This Final Performance Evaluation was carried out between September and October of 2013 by a seven-person team that visited 45% of the project universe, 27 communities in the North served by international NGO consortium partners, and 21 communities in the South served by Tanzanian NGO sub-grantees. Seventy-seven Focus Group (FG) interviews were conducted (in water, school latrines, gender, agriculture, and Village Savings and Loan); average FG attendance was sixteen people with lively discussion and wide participation. Total participants were over 1250, 39% of whom were women. Visual inspections of projectbuilt infrastructure, sometimes of several hours duration, also took place.

iWASH started in January 2010. Implementation of activities started in July 2010 and the program was originally envisaged to end in December 2012. The WADA II Project is an integral component of iWASH and officially started in September 2010, partially funded under a separate mechanism with the Global Environment and Technology Foundation (GETF) and envisaged as a three-year project to end August 2013. A one-year no-cost extension was approved by USAID enabling iWASH and WADA II to be completed together in December 2013. At the time of this evaluation, a cost-extension to these activities was discussion and eventually approved. iWASH officially closed in December 2015.