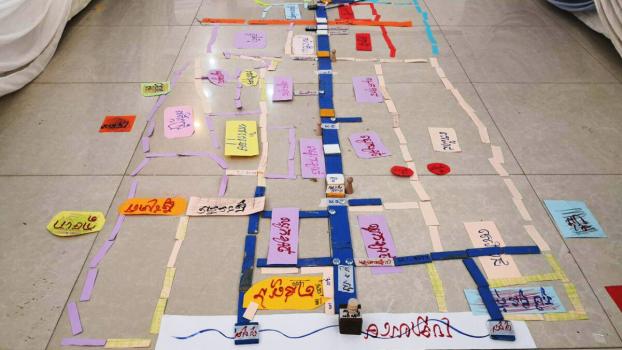 A hands-on irrigation training game teaches farmers in Cambodia how their irrigation scheme works, and how to follow a water distribution schedule to make sure all have access to water.

Few issues are more important in Cambodia than irrigation. The country’s monsoon climate, with heavy rains followed by months of drought, has often prevented farmers from growing more than one crop per year. Operation and maintenance of Cambodia’s irrigation schemes, much of which date back to the 1970s, is the responsibility of farmer water user committees (FWUCs), which are supposed to collect fees from farmers to carry out their mission.

Yet these FWUCs are chronically underfunded, in part because few farmers have undergone training about how their land fits into the broader irrigation scheme, a problem exacerbated by a paucity of maps detailing exact property lines. Without first-hand evidence that the irrigation scheme can provide water at the time and amount they need, many farmers forgo paying the FWUC membership fees needed to help cover the cost of maintaining and operating the systems. The lack of coordinated operation of the irrigation scheme through a FWUC can deprive downstream users of water and cause conflicts between farmers, particularly during harvest times when many farmers need water at the same time.

ISC then held workshops in March and July of 2020 using an innovative, interactive game to train farmers on how their scheme is maintained and operated, as well as the schedule of water releases. The goal was to enhance farmers’ understanding of how their irrigation scheme works, and identify who is using water, and how much. As a result, the trainers hoped to promote outcomes such as improved water allocation and scheduling of water releases, and thus improve the faith of farmers that water will be delivered on time and in the needed quantity. These outcomes would increase farmers’ willingness to pay into a FWUC and maintain the system, and reduce conflicts between farmers. 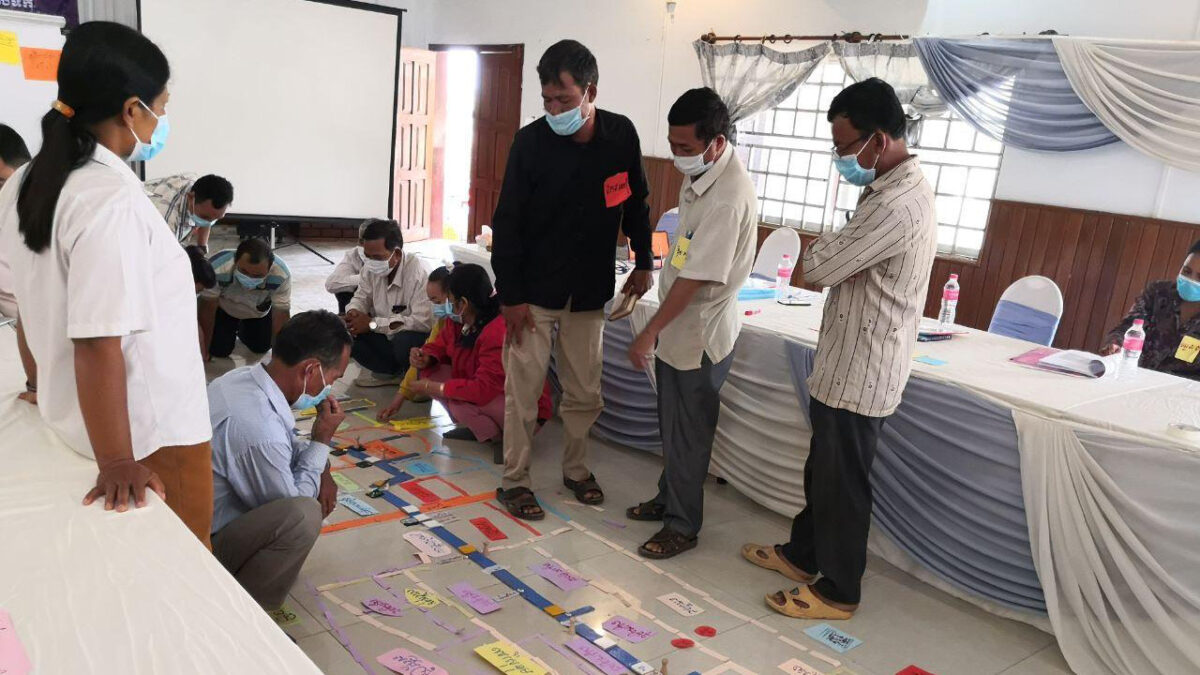 Farmers re-create their irrigation scheme using a game to enhance knowledge about irrigation in Cambodia. Photo By SWP.

Based on the ISC drone maps, the farmers used wooden blocks, chopsticks, marbles, and paper to re-construct their irrigation scheme, like a board game. They then identified irrigation issues of importance to the villages and communes in the irrigation scheme, and learned FWUC regulations such as how many members must vote for a new fee to pass, and how FWUC leaders are elected. They also simulated the effect of opening and closing various irrigation gates along the scheme, to see how it would affect other farmers who rely on the scheme for irrigation. Later in the workshops, attendees took field trips to see the places they had been discussing in person, seeing where water flows in different scenarios.

Farmers discuss their irrigation scheme in this video of the ISC training. Video By SWP.

“This is very practical for the farmer,” said Bunnara Min, the team leader for SWP Cambodia. “Because when they play the game, and understand the irrigation scheme, it reflects their reality. It was a very interesting training, because they practiced more than used theory.”

In some scenarios, the farmers found that upstream areas need water while downstream areas do not, and vice versa. They discussed how to resolve these issues through the FWUC. The farmers then developed a water distribution plan for their FWUCs that scheduled water releases for all farmers with access to the main canal.

Farmers take a field trip to see part of the scheme they discussed during the irrigation training. Video By SWP.

Khut Savoin, vice-chairman of the Hun Sen Baray FWUC, said he took away a lot from the trainings.

“I learned that managing an irrigation scheme requires good data management such as irrigation inventory, irrigation scheme map, size and location of FWUC’s members land,” Savoin said. “I have also learned how to identify and register the size of land from drone maps.”

Farmers help clean algae from a canal after going through the irrigation training. Video By SWP.

Neo Karo, a member of the Baray Commune Council, also said the training was helpful.