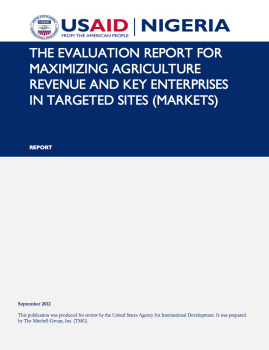 USAID/Nigeria’s Maximizing Agricultural Revenue and Key Enterprises in Targeted Sites (MARKETS) was a multi-faceted six and a half-year pilot program designed to strengthen agricultural competitiveness and food security in Nigeria. The program began in 2005 with a budget of $24 million which later increased to $51.6 million by the time the project closed in December 2010; after which the project was extended for 16 months (January 2011 through April 2012) with an additional $9.5 million through the Bridge to MARKETS II (BtM2) project. The project was managed by Chemonics International with international and local subcontractors, MARKETS employed a private sector-led, comprehensive value chain approach that identified commercial buyers and facilitated inputs that supported farmers to meet market standards and a guaranteed buyer. By the close of the program, MARKETS had worked with 10 major commodities: rice, cowpea, aquaculture, dairy, white sorghum, yellow sorghum, sesame, cassava, cocoa, and maize in 31 States and the FCT. Some value chains were dropped mid-project (e.g. dairy) while others were added from 2010 (maize and cocoa). Food security and nutrition, trade, transport and agricultural policy components were added in December 2008.

This final evaluation fieldwork of the MARKETS program was conducted by The Mitchell Group in June and July 2012. The evaluation was commissioned by USAID/Nigeria Mission with the aim to determine whether the goals and objectives of MARKETS were met; establish how effectively MARKETS interventions were delivered; assess project outcomes; assess the extent to which the project affected its beneficiaries; determine whether the USG investment in the program received the greatest possible return; and learn lessons that will guide the implementation of MARKETS II. The final evaluation was guided by eight key evaluation questions on project design, implementation and outcomes.

The report is organized into six chapters. Chapter 1 is the introduction. Chapter 2 is a presentation of the evaluation findings1 for the five MARKETS core value chain services - agricultural inputs, training and extension, production and yields, credit and processing/agro-industries. Chapter 3 covers the evaluation findings for the four cross-cutting areas - food security and nutrition, trade, transport and agricultural policy and gender. Chapter 4 assesses the effectiveness of MARKETS M&E system. Chapter 5 highlights the constraints and challenges faced during the course of MARKETS implementation. Chapter 6 covers the conclusions and recommendations based on the findings by the evaluation team. Annexes that provide more detail to various components of this report have been attached.