Transforming Sanitation in Africa: Accelerating progress towards the Ngor Commitments to achieve the SDGs 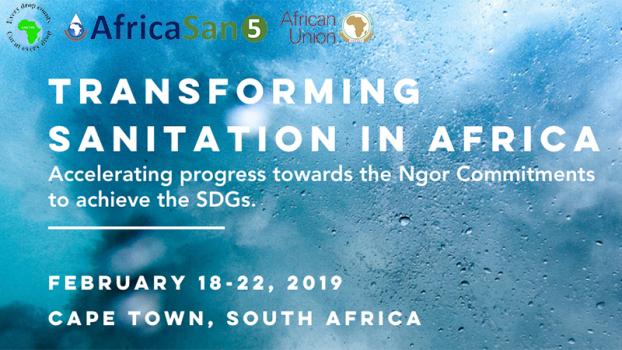 Two organizations are joining forces to deliver a unique synergistic program that will leverage the political might of the AfricaSan 5 Conference along with the practical and technical output of the FSM Conference. Attendees will have access to a wider array of practitioners working to implement new technology in the field as well as to ministers working to frame the policies that will facilitate development in this sector. The conference is being held from February 18–22, 2019.

AfricaSan is a path-breaking initiative of the African Minister's Council on Water (AMCOW) to promote prioritization of sanitation and hygiene in Africa. It is a Pan-African initiative to build momentum to address the ongoing epidemic of a lack of access to safe sanitation and large-scale open defecation. It is attended by Ministers responsible for sanitation and the key agencies working in sanitation and water across Africa.

AfricaSan 5 looks to further maximize value for its participants from the first four AfricaSan Conferences by increasing opportunities for collaboration and partnership between ministers and high-level political decision makers, sector specialists, media and international organizations by facilitating Africa-centric hygiene and sanitation conversations.

FSM5—the 5th International Faecal Sludge Management Conference—has joined the AMCOW to co-convene with the AfricaSan 5 conference. The Sustainable Sanitation Alliance (SuSanA) is a key organizer of FSM5, along with several other co-sponsoring organizations

Building on the success of the first four International FSM Conferences, the FSM conference strives to bring together professionals working in the sector, including utilities, service providers, cities, governments, academics, scientists, consultants, donors and industries, to support the global initiative of disseminating sustainable solutions for Faecal Sludge Management.

Sustaining Latrine Coverage and Use: A Study of Community-Led Total Sanitation Programs in Northern Ghana Brief

Sustaining Latrine Coverage and Use: A Study of the Cambodia Rural Sanitation and Hygiene Improvement Program (CRSHIP I) Brief